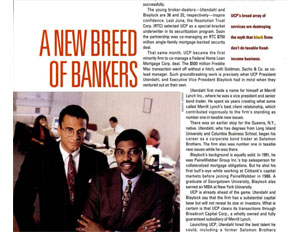 For the 45th Anniversary of the BE 100s—the nation’s largest black-owned businesses—we share 45 milestone events that have had widespread impact on black economic development and American industry across four decades. This tribute salutes the iconic companies and CEOs found on BE’s annual list of the largest black-owned companies.

Today we reveal No. 32 in the web series “Great Moments in Black Business.”

1992: Utendahl Capital Partners is launched, engaging in partnership with Merrill Lynch, giving the bulge-bracket firm a 25% equity stake for $3 million in capital and a $9.9 million line of credit. The arrangement ushers in a second generation of black investment banks that gain access to corporate bond and equity transactions.

When BLACK ENTERPRISE revealed its 1992 list of the 25 Hottest Blacks on Wall Street, the exclusive compilation of “the nation’s leading African American financial all-stars” of that era, there were four black investment banks that made that roster.

Three of them—M.R. Beal & Co.; Grigsby, Brandford & Co.; and Pryor, McClendon, Counts & Co.—burnished their reputations in municipal finance. The fourth was 6-month-old boutique firm Utendahl Capital Partners L.P., which stood out from the pack by handling taxable fixed-income business and as BE reported “breaking a stereotype in mainstream media” that African American firms could not successfully execute corporate bond and equity transactions.

Launched by John O. Utendahl, a 36-year-old Columbia University M.B.A. and former bond trader for venerable financial giants such as Merrill Lynch and Salomon Brothers, it represented the second wave of BE investment banks that were able to generate business in the uncharted territory of corporate finance. “I didn’t get into the municipal bond business because I wouldn’t have known a muni bond if it had bit me,” he asserted in the BLACK ENTERPRISE book authored by Gregory S. Bell, In The Black: A History of African Americans on Wall Street (John Wiley & Sons; $24.95). “One of the things I learned from marketing class in business school is one should not get into a business that he or she cannot do themselves.”

Utendahl also learned how to structure and finance his company so it would be ready to engage in an array of corporate and agency financings on day one. To ensure it could quickly operate at a competitive level, he arranged a strategic partnership between UCP and his former employer, Merrill Lynch, giving the bulge-bracket firm a 25% equity stake for $3 million in capital and a $9.9 million line of credit. He would also bring aboard top talent, including Ronald Blaylock, a 32-year-old top salesman of mortgage-backed securities for PaineWebber Group who served as his partner and the firm’s executive vice president.

As reported in In the Black, Utendahl’s structure was replicated by “a new breed” of black investment bankers that emerged during that period. In 1994, Blaylock would leave UCP to strike out on his own and similar to Utendahl’s approach, he would start his firm via strategic alliance with then-venerable financial giant Bear Stearns, which reportedly purchased a stake for $10 million. That same year Wall Street vet Christopher Williams spawned BE mainstay Williams Capital Group, striking a deal with global investment firm Jeffries & Co. for a 49% ownership stake.

First Black Person Ever to Buy Seat on NYSE

At that time, this new, innovative model for black firms stirred controversy. Gregory Bell reported in his book that a number of critics—the most vociferous being Harold E. Doley, chairman of 100% black-owned Doley Securities and the first black individual to buy his own seat on New York Stock Exchange—cried foul. (In 1971, Daniels & Bell was the first black-owned investment bank to become a member of the NYSE in its 179-year history.)

He wrote that Doley stated that “these are not black-owned companies,” alleging they were similar to fronts used by majority firms to “cash in on Affirmative Action business.” A number of other African American investment bankers may have been less severe in their outlook but questioned such ownership arrangements.

(Video of Doley Jr. being honored for his work in aiding the economic growth of Africa. YouTube/Africa Economy Builders Awards)

Utendahl fiercely defended the strategic alliance model, citing that it positioned him and other minorities to expand their businesses and create myriad opportunities for African Americans. (To gain eligibility in any category of the BE 100s, BLACK ENTERPRISE requires companies to confirm that they are 51% black-owned.)

The capital structure worked for UCP. Within the first few months, it landed several lucrative federal agency transactions. In fact, the Resolution Trust Corp., charged with restructuring the failing savings & loan system and disposal of $100 billion of thrift institution assets in the early 1990s, tapped the firm as a special-bracket underwriter in its securitization initiative. As a result, UCP co-managed a $750 million single-family mortgage-backed security transaction. At the same time, UCP became the first African American firm to co-manage a $500 million Federal Home Loan Mortgage Corp. deal. At the end of 1992, UCP also was the first minority-owned firm named lead manager of a $50 million multi-index floating rate notes offering for Sallie Mae (once officially known as the Student Loan Marketing Association).

Throughout the next decade, UCP would grow through the diversification of products and services, broadening its business to include corporate finance, equity and convertible securities transactions, mortgage and real estate finance and financial advisory services. The expansion, as Utendahl told BE, was a means of minimizing risk.

UCP, which vaulted to No. 5 on the 1995 BE INVESTMENT BANKS list, was also ranked 12th among all investment banks that either led or co-managed mortgage-backed securities underwritings. As reported by financial research firm Securities Data, it was involved in transactions totaling $4.3 billion And that same year, Utendahl’s 2-year-old asset management arm oversaw $150 million in investments for its corporate clients. Three years later, the firm would manage more than $700 million for clients that included Colgate-Palmolive, RJR Nabisco, and Time Warner Inc.

By the turn of the century, the firm’s business model would result in a series of major financial transactions: Utendahl teamed with his former partner Blaylock when their firms served as joint book-running managers for AT&T’s $450 million bond offering (considered among the biggest all-minority and women-managed financings); UCP served as lead manager for Coca-Cola Enterprises’ $300 million bond deal; and the firm was among the underwriters for the celebrated Goldman Sachs IPO. Moreover, UCP acquired Atlantic Portfolio Analytics & Management’s $1.8 billion asset management unit, making it the largest black-owned fixed-income and convertible securities manager.

The Only African American to Own Three BE 100 Finance Companies

Then the financial crisis hit in 2008. Utendahl’s firm, like many investment banking boutiques, was unable to fully weather its devastating blows. By 2010, UCP “transitioned its financial services activities” to The Williams Capital Group L.P. (No. 3 in taxable securities with $3 billion in lead issues on the 2017 BE INVESTMENT BANKS list)— the only black investment bank under the same ownership for 20 years.

One of his barrier-breaking contributions, however, is furthering a new capital model for business development as well as diversifying the taxable securities finance segment. UCP’s  presence enabled more African Americans to engage in corporate debt and equity transactions and demonstrate black firms can produce superior performance on Wall Street. 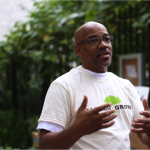