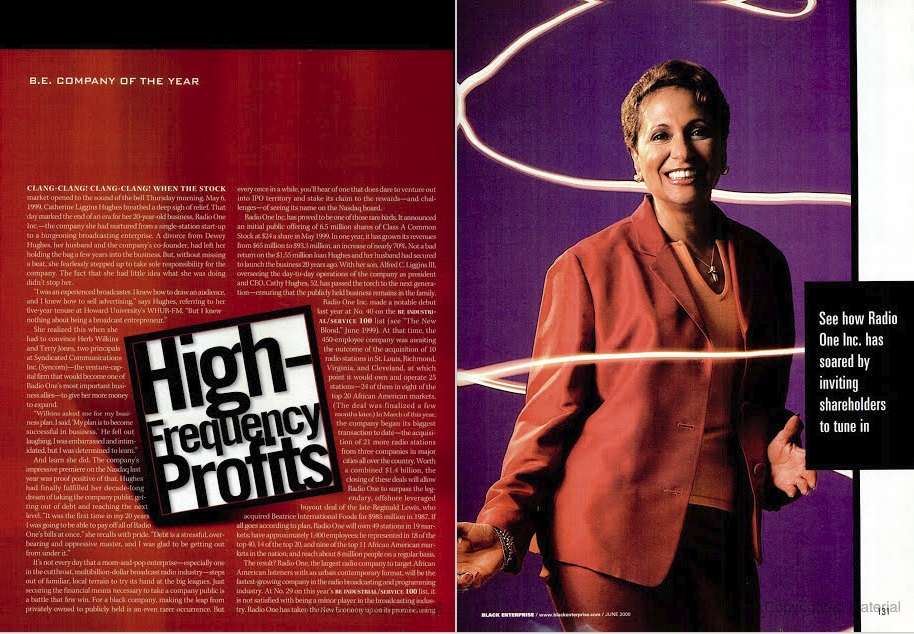 This year BLACK ENTERPRISE celebrates the 45th anniversary of its roster of the nation’s largest black-owned businesses—The BE 100s. To commemorate the significance of this collective’s widespread impact on black business and economic development as well as American industry over four decades, we have presented 45 milestones moments. As part of this tribute, we continue our yearlong countdown.

Today we reveal No. 20 in the web series “Great Moments in Black Business.”

1999: After building Radio One Inc. into a multimedia empire by acquiring more than 70 radio stations, Cathy Hughes takes the company public, becoming the first African American woman to operate a company listed on NASDAQ.

As founder and chairperson of the nation’s largest black-owned media company, Cathy Hughes knows how to turn adversity into opportunity.

Hughes shattered barriers when she took Radio One Inc. (now Urban One Inc.) public in 1999. The landmark deal made her the first African American woman to head a publicly traded corporation. By 2007, she helped Radio One reach a peak of owning 70 stations in 22 markets.

Today, Urban One Inc. is the largest diversified media company primarily targeting African American consumers, reaching some 82% of black U.S. households. The Silver Spring, Maryland-based company is No. 9 on the 2017 Top 100 list with annual revenue of $456 million.

When Radio One went public, Wall Street was in love with the stock. Not only was Radio One among the most successful IPOs for a black-owned firm but any entity of its size and scope. Radio One’s market value hit about $1.8 billion as the stock soared on NASDAQ over its offering price of $24 a share to $96.50 within seven months, up more than 400%.

Using its stock to expand, Radio One emerged as one of the fastest-growing companies within the radio broadcast industry. Named the BLACK ENTERPRISE Company of the Year in 2000, it went on a buying binge, acquiring 12 stations in Cleveland, Los Angeles, Houston, Dallas, Miami, and Greenville, South Carolina, from Clear Channel for a whopping $1.3 billion. Moreover, it spent $40 million to purchase three Indianapolis radio stations and a low-powered TV station from Shirk Inc., and another $24 million in cash and stock for six radio stations in Charlotte, North Carolina, and Augusta, Georgia, from Davis Broadcasting. The acquisitions greatly expanded the company’s footprint, allowing it to offer package deals to advertisers looking to reach the urban market on a national basis.

Branching Out to TV

The deals strengthened Radio One’s balance sheet. Revenues rose to $155.7 million in 2000, nearly double the $81.7 million produced a year earlier. And benefitting from a full year of contributions from the new stations, revenues grew to $243.8 million in 2001. Two years later, Radio One owned 66 radio stations in 22 major U.S. markets with about 18 million African American listeners.

Hughes and her son Alfred Liggins III, Radio One’s president and CEO, had started to activate their program for transforming the company into a multimedia empire with an array of products targeted at the urban market. In 2004, Hughes launched cable network TV One in partnership with mammoth cable operator Comcast, creating the nation’s only black-owned cable channel (BET had been sold to Viacom in 2001) and another top-grossing BE 100s company. Today, the “lifestyle and entertainment network for African-American adults” reaches about 59 million homes.

Another milestone came in 2008 with Interactive One, an online community. Back then, Interactive One operated about 70 digital properties that produced news, lifestyle, and entertainment content and included websites such as BlackAmericaWeb, BlackPlanet, and Global Grind.

Radio One has faced its share of challenges too. In 2006, Hughes and Liggins announced the sale of $150 million worth of radio stations in underperforming markets. And then like a multitude of media companies, the broadcast conglomerate had to contend with static from the financial crisis, tight credit markets, and the downturn in the U.S. economy in 2008. To bolster its finances, Hughes and Liggins sold broadcast properties like its Los Angeles station, KRBV-FM, for about $137.5 million to Bonneville International, exiting one of the nation’s most lucrative markets.

Over the past few years, the company has dealt with sluggish growth from its core radio business due to a confluence of forces that have included a tepid economic recovery, digital disruption, and retrenchment of advertisers shifting more dollars away from traditional media, according to corporate documents. Yet, hard times have never deterred Hughes and Liggins, who literally grew up in the business, over the course of its 37-year history. Hughes first realized such challenges when she and then-husband Dewey Hughes sought financing to buy their own radio station and were rejected by 32 banks until they secured financing in 1980 to buy WOL, a small Washington, D.C. station that spawned Radio One.

Today, Urban One owns or operates 57 stations in 15 U.S. urban markets. Its holdings include iOne Digital (ionedigital.com), among the largest players in the African American media space. Last year, Radio One completed its $40 million investment in the MGM National Harbor Casino and Resort just outside of Washington, D.C. And this year, it initiated a buyout of Comcast’s stake in TV One and made it a unit of UrbanOne (the network is no longer listed separately on the Top 100.)

With a reported net worth of $460 million, Hughes, who received a BLACK ENTERPRISE Women of Power Legacy Award in 2013, is among the nation’s wealthiest African American women. She has flourished over 30 years in an ever-changing industry. A testament to her achievements was her recent honor: Howard University’s School of Communications now bears her name. 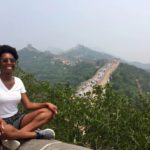 Build on Your College Success by Studying Abroad

Students Demonstrate to Stop Sexual Misconduct at Spelman and Morehouse