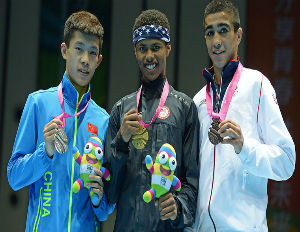 The following is a feature by The Shadow League‘s J.R. Gamble:

Shakur Stevenson smashed his boxing gloves together in approval of his performance at the end of the first round of his Youth Olympic flyweight boxing final against China’s Ping Lyu in August.
The 17-year-old Team USA Boxing savior traveled to Nanjing, China, to compete in the Youth Olympic Games (Aug. 16-28), a global, multisport competition and pre-Olympic showcase of sorts. Stevenson qualified at the Youth World Championships in Sofia, Bulgaria, in April of 2014 with three other U.S. junior boxers.
In a rematch with the crafty, hometown hopeful Lyu, the fight was over as soon as Stevenson’s gloves collided and continued to speak loudly for two more decisive rounds as he took the gold.
“I GOT YA!â€ Stevenson knew what it was and he destroyed his competition in emphatic fashion to become the first U.S. men’s boxer to win a Youth Olympic gold medal in the two editions of the Games.
SHAKUR: It was great winning the Youth Olympics and just being around a bunch of athletes from all over the world that were 17 and 18 years old just like me. There were a bunch of females and all that…It was a great experience.

Black Women in Film Have a Powerful Ally in Terra Renee