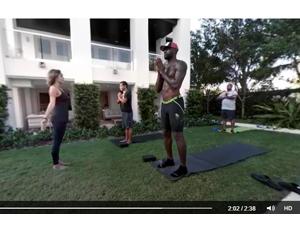 LeBron James strikes a yoga pose in one of his VR videos (Source: Uninterrupted)

The video is part of a five-part series. In it, James does yoga, works out, and dispenses his strategies and life mantra on what it takes to be a champion.

All of the videos in the series can be watched in 360 degrees on Uninterrupted’s FacebookÂ page. Viewers need an Oculus headset to watch in VR.

James is getting a jump start on what is going to be a new wave of 3D, VR content in 2016. Several VR headsets are due out at the beginning of next year, including the new, consumer-version Oculus Rift, the PlayStation VR, and the HTC Vive.

The new VR headsets provide an immersive, three-dimensional experience with content such as Uninterrupted’s videos. A slew of new games, plus other multimedia content for VR is also set for release.

While tech pundits, enthusiasts, and gamers are excited about VR and the upcoming gear, there are still questions on whether VR and Augmented Reality (AR) will generate buzz among everyday users.

By having a megastar such as James release VR video, Oculus and other VR companies and content creators may be trying to whet public appetite for VR and AR.

“It’s unclear if James was paid or takes a share of revenue from ads sold alongside the video, but having the world’s biggest basketball superstar creating content in VR is a pretty great tease,â€ writes Kurt Wagner for re/code.

The virtual reality market is expected to hit $70 billion by 2020.

Striving For Greatness: An UNINTERRUPTED OriginalÂ I was born with God-given talent, but I PROMISE you that when the bright lights go down I am grinding it out and working my tail off to get better. I will never cheat this game… Catch the full series on UNINTERRUPTED #StriveForGreatness #UNINTERRUPTED #IPROMISE