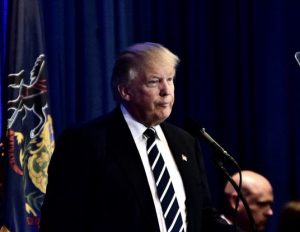 As the first days of the Trump administration began, he and his organization made a number of missteps. The media was keen to highlight the gaffes–most of them feel that he is totally unprepared for the job. Trump critics believe that he lacks the policy knowledge and statesmanship required to be president.

To his critics’ point, Trump has displayed that he can be tone deaf as a politician. He didn’t capitalize on one of the greatest demonstrations ever–300 marches that occurred a day after his inauguration around the globe. The protests were a direct response to his policies and amassed unprecedented support. Trump’s initial response didn’t seem appropriate, but a second was much more presidential–displaying gravitas and recognition of the importance of the event. Soon after,Â an executive order banning travel from seven Muslim countries–that haven’t exported any terrorists–was similarly ill-received, causing a number of airport demonstrations and receiving global backlash.

In Trump’s defense, he is channeling the people who elected him, personifying their views, and fulfilling campaign promises. Regardless of his policies, we should assume that he will acclimate to the role and the realities of the job will hone his skills.

As President Obama stated, “We want him to be successful, our country is dependent on it.” The statement by President Obama speaks to his character, especially when we consider that Trump questioned if President Obama was an American citizen. Obama’s reaction is markedly different than that of Senate Majority Leader Mitch McConnell’s, who upon the election of Obama, openly stated that he wanted him to fail. McConnell fervently worked against everything Obama proposed–even if it was to the detriment of the country. A comparison of the twoÂ outlines the stark differences in their patriotism for our country. Quite frankly, it displays how much of a leader President Obama was and still is.

For those who want to see a fitting homage to President Obama and his optimism–we must get involved and focus on what can be accomplished. People have to look beyond their personal feelings for Trump the man and engage Trump’s administration. He is the president for the next four years and if anyone disagrees with his policies, they cannot afford to sit uninvolved for that period. We must focus on leading the conversation and engaging the administration to obtain objectives–specifically in community redevelopmentÂ since he has personal expertise in that area. We must demand that he provide focused leadership in our communities by having him establish and support Public Private Partnership (PPP) projects. IfÂ he can be focused on an inclusive goal–we can use that to drive progress.

In that spirit, I would like to cite a specific example of Trump being successful within the confines of government through public-private partnerships.

Donald J. Trump had a feud with the then-New York Mayor Ed Koch in the mid-1980s. The subject of the feud was the inability of New York City’s municipality (read as Mayor Koch) to repair the venerable Wollman Rink in Central Park. New Yorkers are familiar with the iconic ice-skating rink between 62ndÂ and 63rdÂ streets.

Wollman Rink sat unused for over six years, as a deadly cycle of non-use, disrepair, and theft plagued it. The result was $12 million expended with the rink not repaired and unusable. The neophyte New York developer Trump opined on the situation, culminating into a tÃªte-Ã -tÃªte with Mayor Koch. The battle of words resulted in Trump being given the reins for the project. Koch initially allowed this because he wanted to stop political in fighting and calls of incompetency. Koch further taunted Trump by saying he would wait “…with bated breath…â€ for its completion.

Trump completed the project two months earlier than scheduled and $750,000 under budget.

Afterward, Mayor Koch stated a litany of excuses. The most important fact was that Trump got it done when Mayor Koch couldn’t.Â In business, Trump has a history of accomplishing goals from his buildings to various enterprises. Most have been very successful; arguably he has had some massive failures, i.e., Trump University. However, it would be foolish to dismiss all of his accomplishments. When Trump focuses on a target–and isn’t distracted–more often than not he accomplishes his goal. That focus is the very reason that I am writing this article; like so many, I completely discounted his presidential run. That is glaring evidence alone that we need to think constructively about engagement with the Trump administration on revitalizing our communities in the following three ways:

A key person to concentrate on for this initiative is Tom Barrack. The chairman of $25 billion Colony Capital is well regarded and very statesmen like. Barrack purchased the Michael Jackson Neverland estate and was one of Trump’s strongest supporters–he is fiercely loyal. A trained lawyer, he has built a track record of success in real estate. Barrack is highly respected with lots of integrity; he took personal responsibility for the inaugural attendance numbers debacle. Most importantly, he is one of the people within the administration that Trump will listen to.

We must demand that President Trump lead the effort to reinvigorate our neighborhoods–he has tremendous credibility in that area. By improving our neighborhoods, we gain a basis to create more wealth within our community. Baldwin has a Diploma in Financial Strategy from the University of Oxford’s Said School of Business and completed the Advanced Management Program (AMP) at Cambridge University, he graduated from Antioch University with a B.A. Baldwin was the second African American member of the Chicago Stock Exchange.

4 Keys to Protecting Your Money When Opening Your Heart