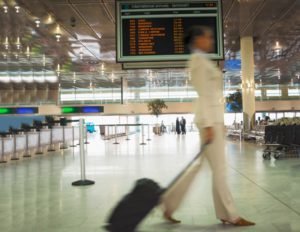 Earlier this month, I was among the thousands of passengers affected, when my flight was canceled thanks to winter storm Stella. Over the course of three days, nearly 9,000 flights fell victim to the blizzardÂ that socked the Northeast.

Here’s what I wish I’d known before my flight was canceled:

1.Â Don’t Depend on the Airline to Notify You

I never got a notification from the airline that my flight was canceled. Sure, protocol is that they try to notify everyone, but, when there’s a major bout of cancellations, things fall through the cracks.

Actually, it was Google Calendar that first alerted me. Downloading the airline’s app makes it way more likely you’ll get that notice.

You can also try out one of these flight tracker apps. At the very least, sign up for text message notifications for each of your flights on the airline’s website.

2.Â Don’t Expect Your Hotel Room to Be Available for You

If you’re away from home when your flight is canceled, and you can’t get out on another flight that day, you’re going to need some place to sleep other than the airport floor. I had quite the rude awakening when IÂ toldÂ the front desk that I may need to stay another night–they told me they were completely sold out.

You’re probably already stressed about having to pay for an extra night or more–if your flight is canceled because of weather, airlines don’t offer lodging vouchers. So, at least try to find a good deal.

Hotel Tonight specializes in last-minute bookings, as does Last Minute Travel. Expedia,Â Hotels.com, and PricelineÂ all have sections specifically for last-minute deals.

3.Â Do Expect That Customer Service Will Be … Challenging

Because my flight was canceled, the details of my booking were no longer available online, which meant I couldn’t change my flights on my own. I had to call the dreaded customer service line, and because there were thousands of other people dealing with the same problem, I had to wait–90 minutes or so–to get an actual person on the line.

If you find yourself in a similar situation, there are a few hacks to cut wait time. You can also try reaching customer service digitally or via social media (apparently, ranting on Twitter is good for something after all).

If all else fails, there’s an app for that. It’s called Service, and it exists for the sole purpose of dealing with customer service, so you don’t have to.