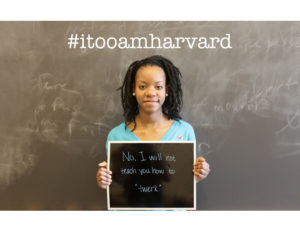 When I first heard about the black graduation ceremony at Harvard, I was opposed to the idea. Why are the students segregating themselves? Why can’t they join the rest of the students in the regular graduation?

But I thought I would check with my cousin Barry, who graduated from Harvard many years ago. To my surprise, he was all for it.

“If it is in addition to the traditional graduation ceremony, in the way that each house has an additional ceremony, I think it would be fine,” he told me in an e-mail.

I was glad I had checked with him, because that was the first thing I learned:

Black Enterprise: Are you for or against the all-black Harvard graduation ceremony, and why?

Kristen Jones Miller: I love the idea of an all-black graduation ceremony. I graduated from Harvard College in 2008, and the “Black Grad” ceremony was actually a staple in the undergrad community—in fact, I was the black grad speaker. I love the [current] effort to make it school-wide because I remember feeling that this ceremony gave me, my family, and friends an even more intimate and community-based setting to celebrate this huge achievement.

That was the second point I learned:

BE: What did participating in the black graduation ceremony mean to you?

KJ: If there had been a cross-school black graduation I would have happily participated in that as well. Ultimately these events aren’t about excluding anyone—they’re about taking another moment to celebrate an amazing accomplishment with a community of people you’ve grown close to.

KJ: No, I think this sentiment is somewhat silly. The black grad ceremony doesn’t replace the university-wide ceremony—it’s a bonus, akin to the house-specific ceremonies that are done at the undergraduate level.

Which brings us to the third fact I learned:

What do you think? And, have your opinions changed now that you know the facts?