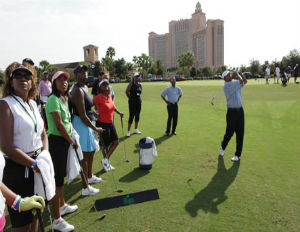 It is officially a wrap on the 2016 Black Enterprise Golf & Tennis Challenge and as with each and every year, expectations were greatly exceeded.

While some attendees enjoyed their Labor Day Weekend on the golf course, others opted for an eventful weekend of tennis, fitness, and relaxation.

As if the Challenge wasn’t already jammed packed with laughter and fun, attendees also enjoyed a Prudential sponsored Love & Money Game Show, hosted by actor Flex Alexander and Black Enterprise SVP/Executive Editor-at-Large, Alfred Edmond, where couples found out how well they knew their honey when it came to money, teams brought their heads together for a friendly game of Framily (Friends and Family) Feud, kitchen masters put their skills to the test at a Master Waffle Chef Challenge, with special guest judge, Chef Ron Durprat of Bravo TV’s Top Chef, and it was hysterical war time, as usual, with an intense Battle of the Sexes, hosted by comedian Chris Spencer. To top it all off, there was also an entertaining Lip Sync Challenge where attendees performed their hearts out to compete for the win.

Amidst all of the fun, attendees engaged in a powerful, solutions-oriented panel discussion at the BE Modern Man Luncheon, hosted by AT&T, where actor Rotimi from Starz hit television series, Power, Miami Commissioner, Keon Hardemon, and founder of The Shadow League, former CEO of Revolt, Keith Clinkscales, and facilitator, BE’s Alfred Edmond, exchanged strategies to overcome injustice and change the narrative of men of color in today’s society.

A whirlwind weekend, to say the least. It’s already time to get excited for next year’s Golf & Tennis Challenge. Get a jump start at planning for an epic 2017 Labor Day Weekend by registering now.

For highlights of this year’s challenge, check out all the weekend’s happenings on social media @BlackEnterprise #BEGT.

The 3 Ways Being In Love Puts Your Assets At Risk