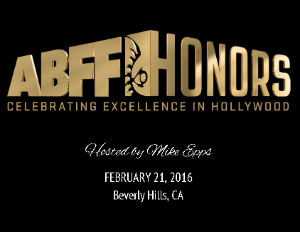 On February 21, 2016 at the Beverly Hills Hilton, ABFF Ventures will present ABFF Honors, a celebration saluting excellence in motion pictures and television. With ABFF Honors, black culture will be recognized for the impact and accomplishments black artistry has had on American entertainment. Hosted by actor and comedian Mike Epps, this ceremony will bring together hundreds of the industry’s most influential filmmakers, executives, and actors.

With a plethora of exceptional talent and creation budding and thriving in the black community today, it is with great pleasure that ABFF Honors announces this year’s awards nominees and honorees.

Television Show of the Year NomineesÂ

How to Get Away with MurderÂ (ABC)

Film of the Year NomineesÂ

Beasts of No NationÂ (Netflix)

The winners of the television and film categories will be determined by the 2016 ABFF Honors Awards Jury, which is comprised of top tier actors, filmmakers, film critics and industry executives.

Produced by Film Life and Black Enterprise, ABFF Honors looks to be one of the highlights of the Hollywood Awards season and Black History Month, despite recent exclusion in mainstream Hollywood’s ‘black art’ recognition. “I have always believed that the black artists in Hollywood would be more empowered if they were more committed to supporting one another, attending celebrations of their culture, and relied less on mainstream validation of their work,â€ says Jeff Friday, president and CEO, ABFF Ventures and Creator of ABFF Honors, “I hope that the success of ABFF Honors will change things.â€

ABFF Honors will set the precedence for black excellence in filmmaking as writers, directors, actors, cinematographers, and producers gear up for the 20th Anniversary of the American Black Film Festival hosted June 15-19, 2016, Miami Beach, Florida. This year the festival takes its talent back to South Beach to celebrate two full decades of nurturing black art and culture by means of exposure, networking, showcasing and uplifting upcoming and existing African American artistry.

Book your ABFF festival passes now. For information on the American Black Film Festival, to purchase pass packages, or to book your hotel for this year’s festival, June 15-19 in Miami Beach, Florida, be sure to visit www.ABFF.com.

For more information on the ABFF Awards and the 2016 ABFF check out Black Enterprise (@BlackEnterprise) via social media for constant news and updates. Use hashtags #ABFFHonors and #ABFF20 to remain in the loop. “ABFF Awards:Â  A Celebration of Hollywood,â€ airs on BET and Centric Tuesday, February 23rd at 8 p.m. ET/PT.