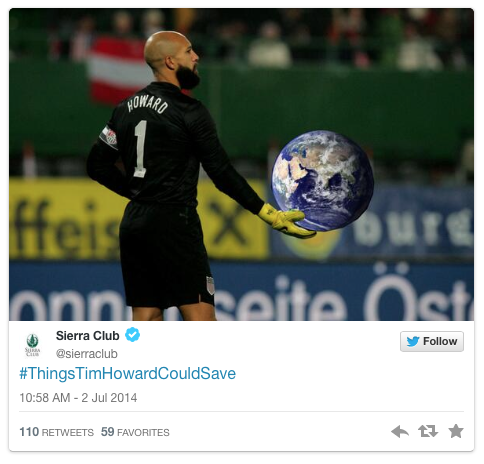 During the adrenaline-filled match, USMNT goalkeeper Tim Howard turned into the “Secretary of Defense,” as he stopped just about everything that was kicked in his direction.

The way the Belgians were playing, that team could have very easily scored an 8-0 game if not for Howard’s phenomenal performance as goalkeeper. He saved 16 shots, a record for the most saves by a goalie in the World Cup in the past 50 years.

Howard dove, jumped, and contorted his body as necessary to prevent Belgium from scoring, although the U.S. eventually lost the match 2-1 in extra time. Howard’s inspired play got the Twitizens on Twitter coming up with all kinds of ideas about what else he could save. Thus, the #ThingsTimHowardCouldSave hashtag was created.

We scoured the Web for the funniest memes on our timeline. So, without further ado, we present 16–one for every wonderful save–things that Tim Howard could save. Enjoy!