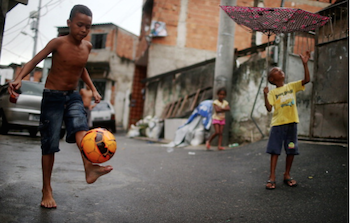 Record revenue is expected from this year’s World Cup in Brazil, with the estimated total for FIFA at $4.5 billion. Why won’t most of that money go to the actual residents?

As television sales figures for the 2014 World Cup tournament come in (so far, it’s $1.73 billion), sponsors, fans, and corporations are all poised to make multimillion dollars for this event.

Add into the mix that the Brazil football will net $576 million in prize money that will be distributed to the participating nations whenever they get eliminated, and you begin to wonder just how FIFA is utilizing their vast resources.

With a flood of tourists, sports fans, teams, and corporations heading to Brazil, the common thought of trickle down economics has become a subject of conversation. So, we wanted to help spotlight the downtrodden masses in “the Real Rio” by showcasing 15 of the most powerful World Cup photos from Mario Tama.