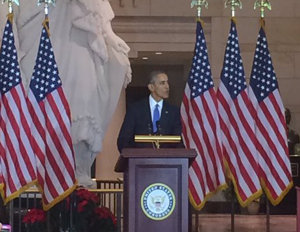 Today marks the 150th anniversary of the constitutional amendment that prohibited slavery and involuntary labor, and President Obama spoke at a commemoration ceremony highlighting issues of race and inequality that are still a national challenge today.

Obama urged the audience in the Capitol “to remember that our freedom is bound up with the freedom of others regardless what they look like or where they come from or what their last name is or what faith they practice.” This remark was seen as related to Republican presidential front-runner Donald Trump’s call to prohibit Muslims from entering the United States.

“We betray the efforts of the past if we fail to push back against bigotry in all its forms,” he continued.

[WATCH] the full video of President Obama’s speech below:

According to reports, White House Press Secretary Josh Earnest confirmed that Obama’s remarks weren’t directed at Trump or any candidate, but clarified that his speech stood in contrast to the message “that’s being promulgated not just by Mr. Trump but a variety of Republican candidates.”

Check out a few social reactions to Obama’s speech below:

Today we celebrate the 150th anniversary of the #13thAmendment and the abolition of slavery. We must always stand up against hate & bigotry

Happy 150th anniversary of the #13thAmendment everyone. I’d say thank a Republican but they all became Democrats. #PartySwitch

Women of Power: Sponsors vs. Mentors: Who’s Got Your Back?