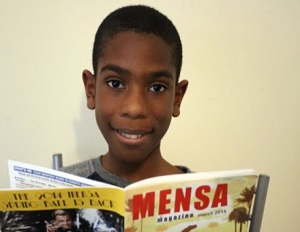 An 11-year-old boy from the United Kingdom is smarter than Albert Einstein, according to a Mensa test he took earlier this year. After writing an impressive essay for Oxford University, Ramarni Wilfred was asked to take an IQ test and his brilliant results proved him to be smarter than Stephen Hawking, Bill Gates, and even Albert Einstein.

“I can’t begin to compare myself to these great men whose hard work clearly proves that they are true geniuses,” Wilfred tells the Romford Recorder.

Wilfred’s mother, Anthea, said that she always knew her son had a special gift.

“By the time he was three he could read and write and from 18 months we discussed the news and his favorite book was the encyclopedia,” his mother says.

Wilfred’s impressive IQ score of 162 has placed him in the top 1% in UK and has earned him a membership spot in the prestigious IQ club, Mensa, where he will be invited to exclusive events and will have the opportunity to mix and mingle with like-minded individuals his age.

“Who knows? Perhaps my ‘true genius’ moment will come when I grow up but for now I am just proud of myself and happy that my mum and sister are proud of me too,” says the young scholar.