100,000 Opportunities Initiative Touches Down in Chicago 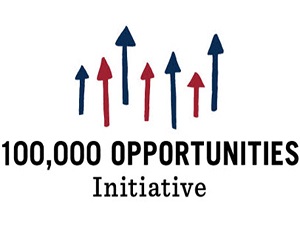 In Chicago, on Aug. 13, an unprecedented coalition of leading U.S. companies came together at an Opportunity Fair & Forum to open doors for 3,000 of the Opportunity Youth in this country– 16 to 24 year oldsÂ who face systemic barriers to jobs and educationÂ –Â and help provide opportunities that could lead to careers and higher education down the line. Called the 100,000 Opportunities Initiative, the coalition of 29 companies is committed to collectively hiring and engaging, by 2018, at least 100,000 16 to 24 year olds through apprenticeships, internships, training, and part-time and full-time jobs.

Starbucks, coalition partners such as Chipotle Mexican Grill, Domino’s, FedEx, Hyatt, Nordstrom, Prudential, Red Robin, and many more; including Macy’s, Walmart, and JCPenney have come together for the next three years to address seemingly intractable problems faced by what are often called ‘disconnected’ youth.

Chicago, with its staggering African American youth unemployment rate of 92%, is the perfect place to launch the initiative, but according to LaJune Montgomery Tabron, president and CEO of the W.K. Kellogg Foundation; a partner in the coalition, the 100,000 Opportunities Initiative will be heading to major cities nationwide.

“What this opportunity holds for the nation over the next three years,â€ says Tabron, “is the beginning of what could be a very historic moment for this country.â€ Calling the initiative “business-led,â€ Tabron said it started with Starbucks but spread to other retailers that have operations in urban areas but were not looking at their enterprise through the lens of corporate responsibility and community engagement.

“Many of these organizations realized that they could do more in the communities they serve to engage and employ their workforce,â€ Tabron says. “And it was an important moment for the Kellogg Foundation to partner with them because, while they have the actual jobs, we’ve been engaged in communities and understand that these youth require support structures and systems.â€

The 100,000 Opportunities Initiative is interested in a long-term, sustainable solution. Tabron says that that kind of sustainability will require community structures that can support these young people. “That’s where I think foundations and local social service agencies on the ground can step in and partner. This is an unprecedented partnership, where all the sectors have come together to embark on this measurable goal of making sure that Opportunity Youth are re-engaged with the economic engine of this country.â€

The supports offered to the targeted young men and women, include job-seeking skills and training. “Whatever their transition-into-employment issues are,â€ Tabron says, “we will address [them] through the work of local social service agencies.â€

Young people in the program will also be connected to higher education opportunities through Arizona State University, a top research university that offers a robust online degree program.

Tabron says WKKF is a key part of the coalition because of its contacts within local communities, allowing for a greater network of support to form around the job opportunities. The foundation is one of the largest philanthropies in the U.S. and is guided by the belief that all children should have an equal opportunity to thrive.

How 5 Celebrities Pay it Forward with Education Programs