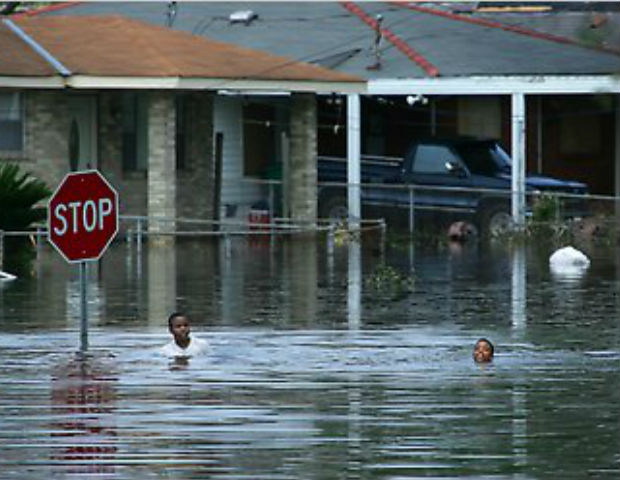 Today marks the official last day that Hurricane Katrina ravaged through Louisiana. Local communities there, as well as across the nation, have been highlighting the continuing aftermath of a devastating storm that left broken levees, hundreds of thousands of displaced residents of Louisiana, Mississippi, and Alabama, and more than $100 billion in damage. The storm began Aug. 23, 2005 as a tropical depression which turned into a hurricane by Aug. 29. Though neighboring states were affected, the most damage was concentrated in New Orleans, and left some of the poorest residents of the region; many people of color, in devastation.

[Related: What Hurricane Katrina Can Teach Us About Insurance and Credit Card Debt]

Due to the hurricane, nearly 2,000 people died and about 90,000 square miles of the United States was affected.

President Obama highlighted issues in the region via a live-stream message:

“When the hurricane struck on August 29, 2005, more than 80% of the residents had evacuated, leaving behind the most vulnerable—those with neither the means nor money to flee,” La June Montgomery Tabron, president and CEO ofÂ W.K. Kellogg Foundation, wrote in an exploration of the foundations efforts in improving lives in the region.Â “New Orleans was predominantly African-American (67%) and 27.9% of the city’s households were in poverty, including nearly 40% of the city’s children. More than 1,800 people died because of the storm, 123,600 people left the city and never returned, and the black population dropped to 60%.”

Residents have relocated to states across the U.S., with some sharing stories of triumph via news and others still struggling to overcome. The catastrophe aftermath also led to a total overhaul of New Orleans’s civic government, as the term of its mayor, Ray Nagin, ended in 2010. HeÂ would later be convicted for related crimes of fraud and corruption before and after Katrina.

Commemoration efforts continue today, and many have highlighted pivotal moments during the disaster as well as the issues that still remain in the region a full decade after the storm hit via social:

Learned more about this at the @ecohybridity Visual Opera I #Periscoped last night. #Katrina10Years https://t.co/c9gH32FjYQ

The levees did not have to break. People made choices that allowed them to break. #Katrina10

Celebrating the heart of New Orleans today, its people, who never gave up on their home, and never will. #Katrina10 pic.twitter.com/wU9FdGLCNL

10 years ago, @usairforce #Airmen of @Keesler_AFB faced one of the greatest tests. #Katrina10 https://t.co/L9eW6tdKpo pic.twitter.com/R1enJjRj76

10 years after #Katrina10, we remember New Orleans’ unity, people coming together to rebuild a city & those we lost. pic.twitter.com/d1uuyF68yu

#Katrina10. Remembering those we lost, praying for those still struggling to get home or rebuild. Rejoice for those home. #resilience

A message from the New Orleans Saints #Katrina10 https://t.co/4DXkiVUSIV

A message from the New Orleans Saints #Katrina10 https://t.co/4DXkiVUSIV

In remembrance of #Katrina10 the City of Atlanta Mayor @kasimreed presented New Orleans with our… https://t.co/BQ3V9kiIZZ

New Orleans & the power of optimism, a decade on from #Katrina10 http://t.co/naZKUFgxKz pic.twitter.com/Vko0mwSXPm