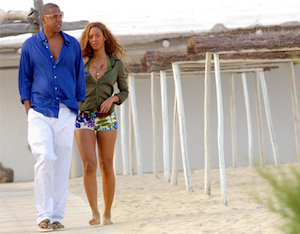 The New York Post has published a second report about the end of BeyoncÃ© and Jay Z’s marriage.

Supported entirely by a “mysterious source” who is close to the situation, the Page Six report hints that the dynamic duo of Hip-Hop didn’t get married because of love —but out of pure business. As the most powerful couple in music, Bey and Jay have the world on a string. A concurrent run of successful tours have made them bank, but behind closed doors their marriage is being scrutinized and picked apart.

The New York Post and their claims have only stoked a fire that claims to engulf the “Crazy In Love” stars in a blaze of glory. Plagued by rumors of divorce, infidelity, disappointment and, of course, a sex tape— the kings, Jay Z and BeyoncÃ©, are mum and extremely private since paparazzi have sniffed blood in the water.

With a combined $100 million on the table awaiting them from the “On the Run” concert, the billionaire husband-and-wife seem to be staying together for the dollar, at least until the tour is over. Such hype cannot be overlooked, so we are breaking down 10 reasons why BeyoncÃ© and Jay Z are heading to divorce court (although we’d rather they not).