10 Places to Celebrate the 4th of July Weekend 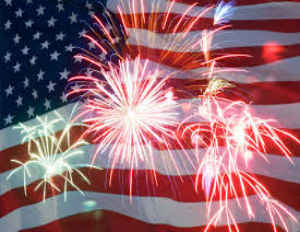 With nearly 42 million Americans expected to travel thisÂ Fourth of July weekend, according to AAA, several states will be super busy gearing up for a weekend filled with events.

From enjoying an explosive Independence day celebration in Chicago to partying it up in New Orleans at the Essence Festival, here’s a round-up of some of the best 4th of July celebrations happening around the nation.

1. Las Vegas, Nevada. From enjoying fireworks at one of the many hotels on the strip, like the Stratosphere, Caesars Palace, or Mandalay Bay, to marching along the Summerlin Council Independence Day Patriotic Parade or The Boulder City Damboree, there’s plenty of ways to celebrate in and around Sin City. Visit Vegas.com to learn more.

2. Chicago, Illinois. A few years ago, the city of Chicago cancelled its official fireworks, but the Navy Pier hosts an unforgettable Independence Day celebration at the pier or Millennium Park. Â Visit Time Out Chicago for a complete list of events.

3. Lake Buena Vista, FL. The Magic Kingdom has a fireworks show on July 3rd and 4th. Although fireworks can be seen throughout the park, the best spot for gazing at the dazzling show is Main Street USA, with Cinderella Castle in the foreground. Fireworks begin each night at 9 p.m. Visit DisneyWorld.com to learn more.

8. Miami, Florida. From the shores of Miami to the swanky boutique and shops along Key Biscayne, Miami has several events planned. The Fire on the Fourth Festival takes place on Miami Beach North Shore Park from 11 a.m. – 9 p.m.

The Village of Key Biscayne will celebrate its ’56th annual Fourth of July Parade’ at 11 a.m. along Crandon Boulevard from Harbor Drive to West Enid.Â Also, the ‘7th Annual Independence Day Hot Dog Eating Competition’ (hosted by CocoWalk) will begin at 6:00 p.m. in Coconut Grove. Visit miamiandbeaches.com to learn more.

9. New York, New York. Macy’s 4th of July Fireworks is one of the most anticipated Independence Day celebrations for New Yorkers. On July 4th, fireworks start at 9:20 p.m. and can be seen from any area with an unobstructed view of the sky over the East River.

Check this as wellÂ