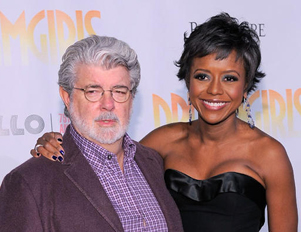 According to reports, power couple George Lucas and Mellody Hobson gave $10 million in support of black and Hispanic student success at the University of Southern California. Through the George Lucas Family Foundation, the funds will provide support to students in the university’sÂ School of Cinematic ArtsÂ to help boost diversity.

“Hispanic and African American storytellers are underrepresented in the entertainment industry,” Star Wars creator Lucas said in a statement. “It is Mellody’s and my privilege to provide this assistance to qualified students who want to contribute their unique experience and talent to telling their stories.”

The George Lucas Foundation Endowed Student Support Fund for Diversity will be awarded to both undergraduate and graduate level students, and the first awards are set to be distributed in next fall. Divided equally among male and female students, recipients will be known as George Lucas Scholars or Mellody Hobson Scholars.

“George Lucas and Mellody Hobson are inspiring leaders in their fields, and tremendous friends to the USC community,” USC President C. L. Max Nikias told reporters. “This gift will nurture the next generation of artists, supporting scholarships that enhance access in the cinematic arts, while bringing new and diverse voices and stories into our lives.

The couple have long been strong advocates for education and diversity, and Hobson Â spoke at USC’s May commencement, where she was awarded an honorary degree for her commitment to being a civic, academic and arts leader. Â Hobson, a Black Enterprise Woman of Power Summit alumna, also serves as chairwoman of After School Matters, a nonprofit that provides extracurricular programs for Chicago teens., and on the boards of the Lucas Museum of Narrative Art and The Chicago Public Education Fund.

Lucas is also founder of the George Lucas Educational Foundation, which provides learning and research resources for students from kindergarten to 12th grade.

4 Common Mistakes Career Switchers Make and How to Avoid Them

4 Pieces of Conventional Hiring Wisdom You Should Ignore