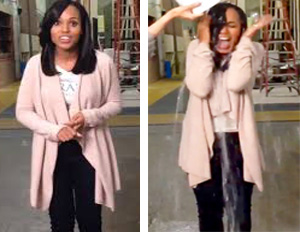 Unless you’ve been living under a rock, you’ve seen or at least heard about the ALS “Ice Bucket Challenge” that is dominating social media timelines. From Oprah, to Dr. Dre and LeBron James, several celebrities have participated in the challenge, with even President Obama being nominated to get in on the fun.

But aside from some of your favorite celebrities participating in the challenge and making you laugh with their ice bucket videos, it’s important to note the importance behind the challenge.

ALS, which stands for Amyotrophic Lateral Sclerosis, is often referred to as Lou Gehrig’s Disease. It’s an illness that affects nerve cells in the brain and spinal cord. Every year approximately 5,600 people in the United States are diagnosed with the disease, with patients having a life expectancy of two to five years from the time of diagnosis. With the ALS “Ice Bucket Challenge,” participants are asked to record themselves dumping a bucket of ice over their head, using the hashtags #icebucketchallenge, #alsicebucketchallenge, and #strikeoutals, while also nominating another person to complete the challenge. If the person doesn’t accept and complete their challenge nomination within 24 hours, they have to make a monetary donation to the ALS Association in an effort to fund research studies surrounding the disease. Luckily, many people have been accepting the challenge in addition to makingÂ  a donation and as of Friday, Aug. 22, the challenge had raised $53.3 million in donations, a huge jump from the $2.2 million the organization had raised during this time last year.

With more and more celebrities joining in on the fun and supporting a good cause, we’ve rounded up 10 of the best celebrity ALS “Ice Bucket Challenges” done thus far.