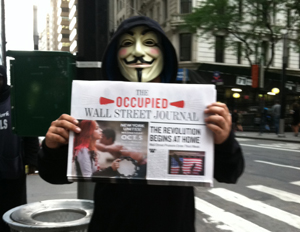 Bloomberg said the health and safety conditions at the epicenter of the protests against corporate greed had “become intolerable.â€

He added that the city had plans to reopen the park after the protestors’ tents had been removed and the stone steps were clean.Â  The police had already let about 50 demonstrators back in when they received word of a temporary restraining order sought by lawyers for the protestors. The police closed the park again until the lawyers could appear at a court hearing.

Police commissioner Raymond W. Kelly said that nearly 200 people had been arrested. Most were held on charges of disorderly conduct and resisting arrest.

Sorority Girls Dress in Blackface to Depict the Huxtables

A sorority at the University of Southern Mississippi has placed six of its members on probation after they dressed in blackface to depict the Huxtable family from The Cosby Show at an off-campus 1980s themed party.

The girls — all members of Phi Mu sorority — met with a group of African-American campus leaders on Sunday, according to News One.

Bank of America CEO Brian Moynihan said Tuesday that the financial institution would work to provide transparency and fair pricing while providing a return to shareholders.

The No. 2-ranked U.S. bank abandoned its $5 monthly debit card fee after substantial backlash from customers and politicians. As other banks retreated from such charges, BofA canceled plans for the fee a month later.

The bank and its peers are updating product offerings to “address new regulations that have reduced our revenues in this business,” said Moynihan at the Bank of America Merrill Lynch Banking and Financial Services Conference.