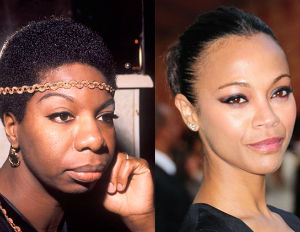 The most heated debate in Hollywood is over whether Latina beauty Zoey Saldana should play music legend Nina Simone in an upcoming biopic, despite the actress’ lack in physical resemblance. Many black film critics and fans of Simone expressed their outrage with the reported casting of Saldana, who is much lighter in skin tone than the dark skinned Simone.

In her Op-ed for the Grio, Veronica Miller writes about the complexities of skin color in Hollywood and why the latest debate is a legitimate conversation to have. Miller, who argues that other actresses such as Viola Davis and Alfre Woodard should have been offered the role, writes that other talents may have been overlooked.

“How revolutionary would it be, really, to cast someone like Adepero Oduye, praised for her powerful performance in last year‘s Pariah, for yet another powerful role as Nina Simone?…Is it still too much to see a black woman, lips full, nose wide, embody talent, power and sensuality? If that’s the case, then it’s obvious Nina Simone wasn’t Â just ahead of her time – she is ahead of our time, too,” Miller writes.