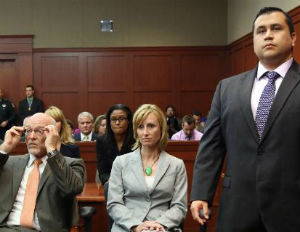 This past Saturday, the world stood at attention in anticipation of the verdict in the trial of George Zimmerman, the 28-year-old Florida man who shot and killed 17-year-old Trayvon Martin in Sanford, Florida. The six-person jury, comprised of white women and one racially ambiguous Hispanic woman, declared Zimmerman not guilty of second-degree murder and the lesser charge of manslaughter. After 17 months of controversy, Zimmerman was free to go home. The rest of the country, particularly the Black community, was left to negotiate the sadness, pain, and confusion of the moment.

For many, the Zimmerman trial was bigger than the fate of an individual defendant. Rather, the trial represented an opportunity to measure the very status of racial democracy. After centuries of unprosecuted Black deaths, Zimmerman’s trial provided a chance to prove that race was no longer an obstacle towards receiving justice. If Zimmerman were held legally accountable, many people felt, our nation would have gone a long way toward making good on its “post-racialâ€ promises.

Unfortunately, from the time Trayvon Martin was gunned down on his way home from a nearby convenience store, the racial deck was stacked against any reasonable expectation of fairness or justice. While George Zimmerman entered the courtroom with the constitutionally mandated presumption of innocence, Trayvon Martin was afforded no such luxury in the court of public opinion.

From the moment he was killed, Martin’s identity and character were called into question by law enforcement, media, and everyday citizens in ways that transformed the “Trial of George Zimmermanâ€ into “The Trial of Trayvon Martin.â€

Some critics argued that Trayvon Martin’s choice of clothing, a dark hoodie, was “criminal attireâ€ that warranted Zimmerman’s suspicion. This perspective ignores the fact that the same hoodie is also a popular fashion choice among middle class white suburbanites and Ivy League college students, who manage to do so without arousing suspicion or getting shot. Others pointed to the fact that Trayvon Martin was “out of placeâ€ in the predominately white neighborhood, making him a worthy target of surveillance and investigation.

Such arguments speak to a larger public narrative that frames young Black men as civic terrors whose very presence demands legal intervention. They also speak to a set of public policies — such as juvenile curfews, stop-and-frisk laws, and Stand Your Ground Laws– that make it both illegal and lethal to be young and black and outside. It is within this context that the defense team was able to convince the nearly all-White jury that a teenage Black boy, even one armed with nothing more than Skittles and iced tea, posed such a threat to the general (read: White) public that his killing was both reasonable and justifiable.

This “blame the victimâ€ approach to criminal justice wasn’t simply reserved for Trayvon. Defense attorneys and their media allies questioned the legitimacy of Trayvon’s family structure, teachers, and friends. Rachel Jeantel, a key witness for the prosecution, became the largest public target. While Zimmerman’s inconsistencies and outright lies were largely ignored in court, Jeantel was framed as immoral and untrustworthy because of minor discrepancies in her testimony. Jeantel was also attacked for her use of non-standard English and disposition towards a hostile defense attorney. By framing Jeantel as less intelligent and less respectable simply because she did not speak Standard American English, the defense was able to ignore her compelling (and irrefutable) testimony that spotlighted Zimmerman’s role as the instigator of the confrontation. As with Trayvon, the conversation centered on her integrity and character rather than the man on trial.

By successfully placing Trayvon on trial, as well as his family and friends, the Zimmerman team spotlighted one of the nagging secrets in American life. While there are plenty of available scripts in American public life for Black pathology, there are none for Black victimhood.

As a result, it was easy for the bullet riddled body of Trayvon Martin to be placed on trial. It was even easier for the guilty verdict to be rendered.

Pipeline to Power: BE’s Industrial/Service Company of the Year

Project Aims to Grade Performance of Colleges and Universities