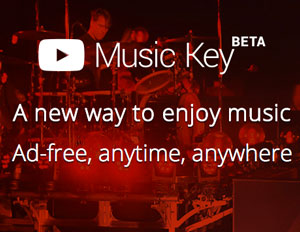 YouTube Music Key offers ad-free music videos, and a Google Play Music subscription, something hinted at for a while. (Image credit: Google)

The long-rumored subscription service to YouTube is finally here, and it brings a host of welcome features with it. Namely, it’s ad-free.

Named YouTube Music Key, the ad-free music video service has been in the making for months, but its features make the monthly fee a questionable decision.

Starting at $7.99 per month, Music Key gets rid of one of the most annoying parts of watching videos: the ads.

YouTube is the largest streaming service in the world, capitalizing on its success makes sense. But its rise to power isn’t because of a subscription service. It’s because it’s free.

But while it sounds like YouTube is just charging for an ad-free version, it’s a little more complicated. First, not all videos will be ad-free, only those involved in YouTube’s Music Key program.

It’ll also offer background playing of YouTube videos, meaning you can go about your day while listening to your favorite artist’s song and not have to stare at your screen. Offline playback is also supported, making it seem more and more like Google’s Spotify competitor, Google Play Music.

YouTube Music Key is currently in beta, and its an invite-only affair for now. Google is rolling out the service “in the coming days” and offering six months free to an unspecified number of those who sign up for the beta.