Young and Fearless: How Being a Self-Starter Can Lead to Wins 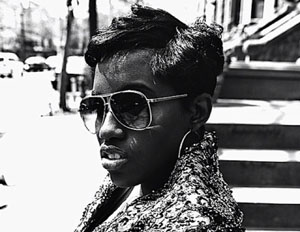 For many millennial leaders, life isn’t about getting just any job and taking home a check every two weeks. It’s about paving their own way, calling their own shots, and making a living to boot.

For some, the path to that type of freedom is a long and winding one. For others, it’s one pushed into overdrive by sheer fearlessness and an extreme, almost innate self-initiative. Take 25-year-old Syreeta Gates (@SyreetaGates): She’s self-published her own book, Just BE Cause: Ah Ha Moments to Inspire the Next Generation of Change Makers. She’s worked for a major design label before the age of 20. She has started her own social entrepreneurial movement with The SWT Life, and has been named one of Glamour’s “20 Amazing Young Women Who Are Already Changing the World.”

BlackEnteprise.com caught up with the Queens, New York native—and self-proclaimed “culture creator”—to talk about how being a self-starter helped her pave her own way and how you can too:

BlackEnterprise.com: You’ve always been very confident and fearless in going for what you want. Talk about how you got your start as a culture creator.

Syreeta Gates: I’m a firm believer in following your passion. As a teen, I saw young people of color on Polo.com and thought that was unusual. I decided to Google information on how to contact the corporate office and see how I can be involved. I called them, and though I knew what I wanted my end result to be, I didn’t have a specific ask at the time. I was connected to the corporate responsibility department and then to [Alexander] Divine Bradley who worked with youth at Polo.com. That led to my involvement with Team Revolution, [a program that advocates for teens in social entrepreneurship.]

But why Polo? What led you to just cold call that particular brand?

I was always a fan of what it represents: the American lifestyle. I just thought it looked fly. I loved the way people I saw in my community and around me put the clothing together. Also, Kanye West has a lyric in “Diamonds From Sierra Leone (Remix)” that goes “On the Polo Rugby/It look so nice/How could something so wrong make me feel so right?â€ and that really sparked my interest as well.

And how were you able to land a job there after the program?

At the end, our team had to present a major jacket design project for executives. It was first time I had to do a presentation in my life. I was already a big fan of the brand so I had lots of pictures and had been getting involved in community projects. When it was our turn to present, Ralph Lauren was delayed in arriving, so we had to start our presentation from the top when he returned to the office. Our team’s design won out among all the designs presented and it was actually produced. After that, Mr. Lauren offered me a job. I was 18. It was a beautiful experience … a really, really cool opportunity.

You’re an advocate for youth, particularly when it comes to social entrepreneurship, and you decided to publish a book about it. Why go that route?

Well, being part of Team Revolution we had three options, and one was in the area of social entrepreneurship. I never even knew what a social entrepreneur was, but I’ve always been an entrepreneur. I would sell things to my classmates at school—popcorn, bookmarks, desserts, 2-way pagers, you name it. I’ve always been someone who sold things. In terms of my relationship with service, it’s always been different. My mom and grandmother gave in ways that were personal to them. Service is passion filled. So I’ve always wanted to do projects that I thought my friends and I would be interested in. That’s where The SWT Life comes in.

I’d often have conversations with friends, and at the time when I was featured by Glamour, I wanted to build on that traction.Â  I believe in problem and solution, so I thought about the problems I had as a teen. I didn’t really see anyone who represented me and who I could relate to in social entrepreneurship. I was a young person of color and female, and I don’t come from money. And I’ve always loved the Chicken Soup model. I talked with Jullien Gordon, who had already written books, and he sent me resources on how to get started. I reached out to contributors and had them tell their stories, and I followed the steps I’d read from Jullien about how to self-publish. I wanted to touch every ethnic group, socioeconomic class and age range, so the book has insights from all of them, with people ages 16 to 60.

What tips would you have for someone who wants to step out and make things happen for themselves?

First, Google is your friend. Do your homework on everything. If it’s something you’re interested in, you can get the information online. Twitter and social media is great too.

Second, be accustomed and comfortable with failure. You’re going to fail often. I failed at a lot of things. The interesting thing about failure is that when you’re young, you [have more room to do it often.] When you’re older you’re afraid of it [and have more to lose]. Don’t be afraid. It’s going to happen so might as well embrace.

Last, create projects you’re passionate about. As a culture creator, I literally create culture. I’ve done murals, radio segments, released a book, done speaking engagements, and participated in hip-hop conferences. I’ve even done mixed tapes, not necessarily because I’m this great rapper but because I love music so much. You have to create the things you want to see. Create the opportunities.

How to Use Google to Land Your Dream Job