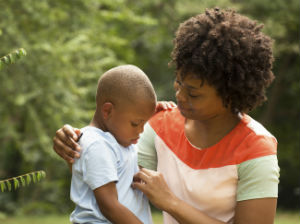 When I was five- years-old, my family gathered around our black-and-white TV in the living room and watched a cowboy movie. One guy shot another guy, and he fell off his horse, clutched his bloodless side, spat out a few final words, and died.

I remember pressing my cheek on my mother’s thick, soft arm and asking her why the man agreed to be killed just to have a chance to be on TV. My mother chided me,Â “Child, they’re just actors. No one actually dies on TV. When the cameras turn off, those actors get up and go home, laughing.â€

I was relieved. You see, I had recently attended my paternal grandmother’s funeral, and the older kids on my block broke down the harsh realities about death to me, after I told them that I was to visit her again next weekend.

I had a hard time processing the fact that my grandma–the one who gave me sponge baths, called me “Sugga,â€ and always had a freshly baked cake in a glass platter on her kitchen counter ready for the tastin’–was never, ever coming back.Â That’s how I learned about the ugliness of death.

In the subsequent 35 years, I had never watched a man actually get shot on TV. That is, untilÂ Laquan McDonald, Alton Sterling, and the most graphic of all,Â Philando Castile.

All were black men (among many others) who didn’t deserve to die, shot by white police officers, caught on candid camera.

This blog post is not about my political outrage, although I’veÂ voicedÂ thatÂ previously. Today, I’d rather take a moment to grieve for the children who have seen these horrible images and now know too much.Â

The Dangers of Knowing Too MuchÂ

Kids are watching people,Â real people, die on their TV and computer screens.Â If not on cable news, then on YouTube, and no one can comfort them with the assurance that after the video ends, the people they see get up and go home laughing.Â The blood is real. The bullets are real. The police are real. The gangs are real. The black men they see bleeding out on the concrete are real.

I’m not a psychologist, but I know that these images have a profound effect on one’s psyche. I’ve had a hard time sleeping. I’ve cried more tears than I’d like to admit. I’m scared.

Just this past Sunday, my husband decided to take our van to a local gas station in Chicago to fill the tire with air, and I practically begged him not to go. It was just nine o’clock at night, but it was dark outside, and he was alone.

I asked him to wait until the morning. He shrugged at my suggestion and left. I found myself checking the clock and peeking out the window.

He’s not back yet?

My husband is a 6’1â€, 215-pound, muscular, African American man, yet I was dreaming up ways to protectÂ him.Â

So if I’m somewhat of a wreck, how are our babies coping with the violence? It was devastating to see Alton Sterling’s 15-year-old son wailing,Â “I want my daddy,â€Â at his family’s press conference.

Teachers,Â what kind of students can you expect this boy and his four siblings to be next year?Â He and tens of thousands of kids around the world saw his father slammed to the ground and shot by a policeman in the chest at point-blank range.

What about the four-year-old girl who sat in the back seat of the car as Philando Castile was shot by police? She is heard at the end of the video consoling her mother, saying, “It’s OK, Mommy. I’m here with you.â€

I praise God none of the bullets that killed her mother’s boyfriend ricocheted in the car to take her life, too.

I fear we are raising a generation of black children who distrust cops. I don’t want our children to equate cops with killers.

When that happens, theÂ ambush in DallasÂ that resulted in five slain cops and seven wounded, will occur again and again. Their children have also been traumatized and the ripple effects could be significant.

#BlackLivesMatter supports peaceful demonstrations against police brutality, not violence—especially not violence against the police.

As the mother of a two-and-a-half-year-old black boy, I hold my son close at night and make Psalm 91 his lullaby. It’s a prayer of protection, a promise.

Even though my heart melts at the sight of his caramel-colored face, big brown eyes, and kinky-curly afro, I’m aware that as he ages those features could fit the description of a random police suspect or be perceived as a threat.

I dread the day when my sweet baby boy realizes for himself these sad realities of being a black man in America. Hopefully, he won’t come asking me at age five about whether the man shot on TV is really dead.

I want him to be a child long enough to recall the days of his innocence, when death and dying were just for actors who pretended, then got up and laughed their way home.

This post was written byÂ Marilyn RhamesÂ and was originally published on Education Post. It is reprinted here with permission.Â Rhames currently serves as alumni support manager at a K-8 charter school in Chicago. She alsoÂ writes award-winning education commentary featuredÂ on Chicago’s Moody Radio.Â She is a 2016Â Surge Institute FellowÂ and the founder of the Christian nonprofit,Â Teachers Who Pray.

STFU and Do Your Job