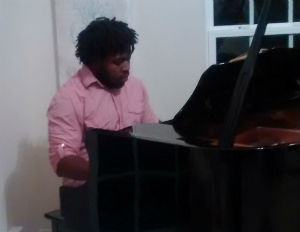 When Tiffani Berry was carrying her unborn son, she noticed how he kicked and became energetic during her college classes in a way that he didn’t when other things were going on.

She wondered if she was just imagining it, but then she started paying attention to the patterns. She compared the way he responded when she was reading to when she watched TV. There was a discernible difference.

After Devin was born, it was clear that he was an inquisitive child. “It was an amazing process to watch him grow,â€ she says, noting that teachers also found him an exceptional student.

“We started him at a small private school, and they suggested that we promote him one grade higher.â€

When he was in fourth grade in public school, Berry had her son tested formally for the first time. “The testing was prompted by a spelling bee that he had won. The Gifted and Talented coordinator, who was white, suggested it.â€

At the time Berry was nervous about doing the formal testing–not because she feared he wouldn’t excel, but because she herself had been in gifted programs as a youngster, and as a result had felt racially isolated. “I was often the only student of color,â€ she recalls.

But she wanted Devin’s potential to be developed to the fullest, so she went ahead with the testing, and sure enough Devin tested in the gifted range with an IQ of 132. Since then, he’s been able to take advantage of gifted and talented services through the schools. However, he has indeed had few classmates of color and, now 18, is applying to several historically black colleges. He intends to study engineering or architecture.

“He uses good reasoning skills and is a great analytical thinker. He does well generally,â€ Berry says. In spite of the lack of diversity he’s been exposed to, he’s had a positive experience, Berry says.

“He will get students to help us with Adopt a Highway,â€ a litter prevention program that allows people to be responsible for keeping 2.5 miles of highway litter-free. Devin has also volunteered with Habitat for Humanity, the Christian home building ministry, and is a member of the governor’s Youth Development Academy, “essentially an employee of the local school system,â€ Berry says. He is also part of the prestigious Johns Hopkins Center for Talented Youth.

Passionate about football and robotics, Devin has a bright future ahead.

For more about being young, gifted, and black, see the BE Smart website.