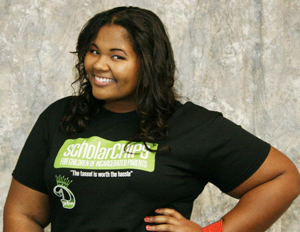 But like a true champ, Yasmine didn’t let her unfortunate circumstances drain everything. One day while searching for scholarships, Yasmine’s grandmother—who she unknowingly giggles over every time we mention her in our talk—said, “Yasmine, I really don’t see any scholarships for teens with incarcerated parents.” Intrigued by the observation, Yasmine began doing some research. She found out that there were millions of children in the United States just like her. From there, the groundwork began. “I understood the financial and emotional struggles of being a child with an incarcerated parent. I just had to do something about it, so that’s how ScholarCHIPS started.”

The Strategic Communications and History student minoring in African and African American Studies says that she wants people to know thatÂ even thoughÂ some kids have an imprisoned parent, that doesn’t negate the fact that “They’re all very intelligent; they’re scholars.”

Her road hasn’t been easy, but she takes it all in stride as part of her “assignment.” She’s finds it “therapeutic, and it helps me to keep everything in perspective.” The promising youngster says, “When I tell people my story, it inspires them beyond ways I can’t even see on the surface.”

After a life of events that some adults twice her senior can’t even relate to, Yasmine credits her peace and youthful glow to her grandmother and her faith. “Thankfully my grandmother has been very strong throughout the whole process,” she says with an airy relief. “I also found support in my church members. Sometimes they would take up collections for us.”

Yasmine’s commitment to helping others through her testimony is one that is here to stay and evolve. “The vision is that it will become a national scholarship and mentoring program. Not only for the high school graduates and college scholars, but for the younger generation,” the aspiring minister declares. “I would say like all the way from 12-years-old to about 22-years-old. Internationally.”

To date, ScholarCHIPS has been able to award over $44,000 to students like Yasmine. Her efforts to bring awareness is ongoing, as she shares the awesomeness that is ScholarCHIPS whenever the time allows. As the official D.C. representative for the Miss Plus USofA National Pageant, Yasmine even dedicated her platform to Supporting and Mentoring for Children with Incarcerated Parents.

Yasmine’s story leaves us with many thoughts, about ourselves and our varying journeys. We’re reminded that pain doesn’t have to be in vain, nor is it supposed to be. Like Yasmine, we can bounce back from all of life’s blows and use our story of victory to better serve the world.

View theÂ SchoarCHIPS submission guidelines here. Applications for 2015/2016 must be postmarked by March 15, 2015. You can also donate to the ScholarCHIPS fund.