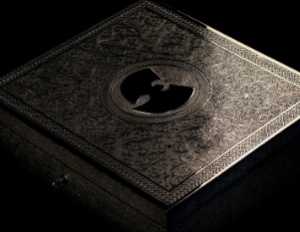 Once Upon a Time in Shaolin is a Wu-Tang Clan double album that will be available to only one buyer.

The Wu-Tang Clan has been working on a secret album, and is banking on it changing the way people value contemporary music–by releasing a single copy.

The group’s new upcoming LP “The Wu – Once Upon a Time in Shaolin,” wants to change the perception of the art form amid the growing devaluation of music offering millions of songs for little to no money.

The album’s extreme rarity isn’t accidental. According to the group, music has become less valuable thanks to streaming sites that provide inadequate compensation for the artists themselves.

“The main theme is music being accepted and respected as art and being treated as such,” RZA said to Billboard. “If something is rare, it’s rare. You cannot get another.”

The album is six years in the making, with both RZA and Cilvaringz as co-producers. The one-off is a separate release from its 20th anniversary album A Better Tomorrow, debuting this summer.

The album’s site explains the reasoning behind the decision.

“The music industry is in crisis. Creativity has become disposable and value has been stripped out,â€ the manifesto reads. “Mass production and content saturation have devalued both our experience of music and our ability to establish its value. Industrial production and digital reproduction have failed. The intrinsic value of music has been reduced to zero. Contemporary art is worth millions by virtue of its exclusivity.â€

True to form, RZA equated ownership of the one-of-a-kind album to “…somebody having the scepter of an Egyptian king.â€

The album will go on tour through museums and festivals throughout the world before the single copy is sold to the highest bidder.

“They all individually stand to make millions of dollars off the album sale, listening events and tours,” he said. “With music piracy becoming commonplace and streaming services paying scraps to artists, I’m sure there aren’t any groups consisting of 9 rappers who can say that.”

The highest bid? “So far, $5 million is the biggest number,” according to RZA.

Love and Money: Should You File a Joint Tax Return?