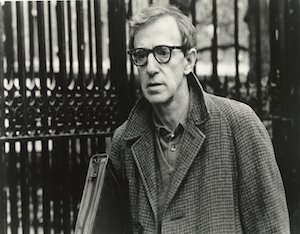 TheÂ New York Observer recently published a profile on Woody Allen, which is sure to be met with mixed reactions—with some being groans.

The writer of the piece, Roger Friedman, went down the usual list of accomplishments and little-known-facts about the veteran filmmaker. As the chat went on, the author dug in his heels and asked Allen why there has been few to no black actors prominently featured in any of his films.

Sergio Harford of Shadow And Act wrote about the few exceptions to Allen’s proverbial rule about casting black performers in his films. “Midnight in Paris” featured Sonia Rolland as Josephine Baker, although she played the background as an extra with no lines.”Deconstructing Harry” had Hazelle Goodman as a prostitute. Chiwetel Ejiofor was credited with the “most significant presence of a black actor in a Woody Allen film” when he appeared in “Melinda and Melinda.”

Yet, instead of listing these accreditations, Woody Allen appeared “horrified” when the subject came up in the Observer interview.

Allen admits that he doesn’t hire based on race, yet doesn’t write any diverse scripts to be turned into films. His love of New York City, which is one of the most racially diverse places in America, always appears to be lily-white whenever Allen focuses on the subject. The very contradictory statement made by the veteran screenwriter would lead one to believe that there would never be a time where he would hire anyone diverse because he wouldn’t write a story that would require it.

Instead of putting coals to Allen’s feet about his lack of variety on film, Friedman allows Woody to shift the conversation to his one black friend—Chris Rock. “I took Chris out to dinner one time when we were in Rome,” Allen admitted to Friedman. “I don’t have any white friends either,” he mused.

Does Woody Allen’s behavior surprise you? Should he feature more performers of color in his films? Or is it his right to create how he sees fit? Share your thoughts in the comments section below.