Womenâ€™s History Month: Leslie Morris and Women of the Dream 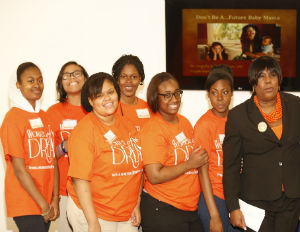 (Image: Women of the Dream)

It’s hard to imagine that in 2016 in the U.S., there are girls who’ve never eaten an orange, or that don’t know what (never mind where) Boston is.

But these are the girls whose limitless potential is being prodded and shaped by Women of the Dream in Camden, New Jersey.

The brainchild of Leslie Morris, Women of the Dream provides workshops within Camden’s public schools that speak to the hearts and minds of severely disadvantaged seventh and eighth grade girls.

Morris came up with the idea when she realized she knew a lot of very successful black women whose parents had, like hers, embraced Martin Luther King’s dream of a bright and vibrant future for their children.

A 1975 graduate of Simmons College, Morris began to track the success of black women who had graduated from Simmons in the years 1965—1979. She was astonished at what she saw.

“Lots of successful black women came out of that period,â€ she says. Morris wanted to bring the women together and use their combined influence and resources to improve chances for the next generation of socially and economically disadvantaged girls.

Because of a personal friendship with Denise Morrison, president and CEO of Campbell Soup, which is based in Camden, Morris began by focusing her organization on that city. As someone looking to work in a depressed community, she couldn’t have selected a better place.

Of cities its size, Camden is the poorest in the nation. It is here where Morris met a seventh-grade girl who’d never tasted an orange, and another who didn’t know what Boston was. Family breakdown is rampant, as is teenage pregnancy and incarceration.

But Women of the Dream isn’t daunted; instead, Morris and a small team of volunteers go into the schools and hold 10-week, two-hour culturally relevant workshops where they discuss things such as “family dynamics, dating and relationships, setting standards, and the surrounding community,â€ says Morris. There is no charge to participate.

With a master’s in clinical social work and public health, maternal and child health, Morris is a natural at sharing her expertise with the girls. She previously spent 13 years directing a program to combat teen pregnancy. Morris’s other credential is that she, too, grew up in poverty and had to overcome obstacles to succeed.

A primary goal of Women of the Dream is to launch a mentoring program. “That’s in our three-to five-year strategic plan,â€ she says. “We’re in the planning stages of matching responsible, caring adults to girls 12—18.â€

Morris would like to eventually take the program statewide–she’s already getting requests from other towns in New Jersey.

For more information about Women of the Dream, go to its website.

What You Need to Know About the New Windows 10 Preview