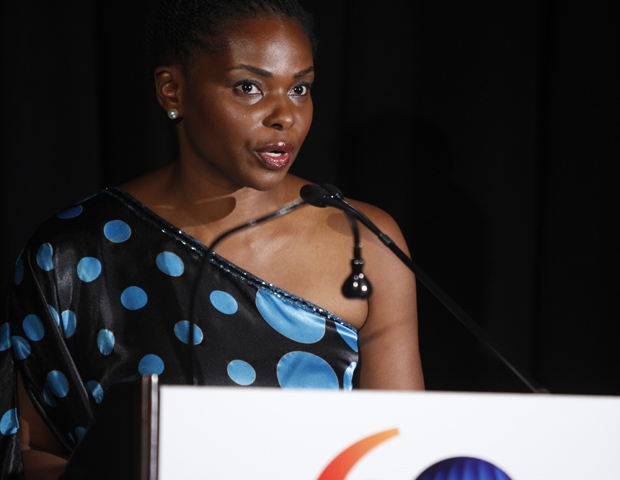 If you want to be inspired by a story of innovation, courage and authoritative leadership, take a few pages from the book of Amini Kajunju. She’s the president and CEO of the Africa-America Institute, an international education and professional development organization that promotes engagement between Africa and America—the first African to ever hold the post in the nonprofit’s 60-year history.

The native of the Democratic Republic of Congo has lived in five different countries since the age of 18, has more than 20 years of experience in economic development, having served as CEO of Workshop in Business Opportunities (WIBO), a New York-based nonprofit small business development service provider, and is oftentimes one of few women at the global business table, tasked with driving the strategic vision and direction for AAI’s programming, and strengthening its engagement with 23,000 AAI alumni and partners.

BlackEnterprise.com caught up with this dynamic power woman to talk her career journey, how authoritative confidence can take anyone a long way, and how women can be fearless leaders in achieving their highest career goals.

Talk about your role at AAI. What is the best part about waking up in the morning and going in to do your job?

Talk a bit more about what AAI does in bridging the gap between Africa and America.

We have two major objectives. The first one is really building the human capacity for Africans and making sure African nationals have the opportunity to learn skills that are necessary to advance the continent.

The second is for those who live in America to better understand what Africa is all about. We serve as a bridge to Americans who want to learn more about Africa. We see ourselves as an institution that gathers individuals who know about and work in Africa, and convenes them here so that those living in U.S., particularly in major markets like New York and Washington, D.C., can come and hear from them and really understand how Americans can best interact with and ultimately invest in Africa.

The definition of diaspora is not just someone like me, for example, who was born and raised in Africa but came here to go to school. For me, it means African-Americans, Caribbean Americans …They’re also part of the diaspora. So, we want to make sure that those with African ancestry who have skills and talents to bring development to Africa are part of the conversation.

This is one of the reasons I think being located in NYC is very important because it has the diversity of the diaspora, so that all can be included in the conversation. When we say diaspora we mean everybody.

Let’s switch gears a bit and talk about your diverse career path. What skills and talents were you able to develop and carry from past posts into your current one?

I really sought to get a good education. I went to Brigham Young University in Utah and then New York University. I’ve always sought to get a good educational foundation. While doing so, I also made sure to engage with people and institutions that care about the kind of work I wanted to do. I’ve always wanted to do economic development work and be involved in fields and projects related to it.

I’ve also always been very clear that I wanted my career to have an African focus, so all of my jobs have had that, except my previous job, which was very local. However, even in that position, where I didn’t really interact with Africa, I was able to develop leadership skills. Because I was executive director of Workshop in Business Opportunities (WIBO), I was then seen as someone who would be capable of running AAI.

What career advice would you tell your 21-year-old self today if you knew then what you know now?

Travel more. I traveled quite a bit back then, but I’d do more than what I did. Seeing the world is an education in itself and it helps you have a perspective of the world that’s really advantageous for when you’re job seeking—particularly if you are seeking an international career. It also gives you an advantage when you’re trying to solve problems. When you have a globalized view and you’ve seen a lot of countries and how different people do certain things, you come up with better ideas of how to solve problems.

I’d also tell her to stay close in touch with the people who have been really good to her throughout her career. We live in a world where people change jobs all the time, and that’s fine, but really do a better job with staying in touch with people who positively influenced you. Be diligent about holding on to those relationships. Over time, you may still have a lot to offer them, and they may have a lot to learn from you as well.

Being a woman in leadership, talk about overcoming challenges in being taken seriously and your advice for other women who are leaders or seek to become one.

I don’t allow people to intimidate me. I’m respectful and engaging, yet fearless. Even when I’m in an environment where it is male-dominated—where a woman might be seen as a person who serves the coffee—I dont’ let those things bother me because I’m very expressive and I’m not afraid to say what I think. If I have an opinion, I share it. I’d encourage women to find their voice and always express what they want and need. People respect those who state their case and say it with eloquence. They have no choice but to hear you.

I also go into a situation focusing on being confident in the end goal, and I don’t allow anyone to stop me from doing what I need to do. I have a level a confidence, and I know what I’m good at and what I’m not. I’m open about those things. I walk into a situation expecting someone to treat me like an equal and I give off that confidence. When you do that, people are compelled to act in kind.

For more information on the Africa-America Institute and its programs, visit AAIOnline.org.