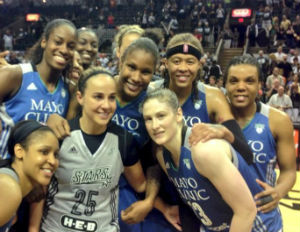 Becky Hammon ascending the ranks to becoming the first woman assistant coach in the NBA, has expanded the realm of possibilities for how far women can go in the men’s league.

“As more women are placed in roles traditionally held by men, the hope is that women will excel in these roles, climb the ladder and rise to positions of power to hire other women,â€ says Shana Renee, creator of AllSportsEverything.com and the web series UnManning The Game.

Last year was a significant milestone year for the NBA, with Hammon being named as the assistant coach to the San Antonio Spurs and Michelle Roberts becoming the first female executive director of the National Basketball Players Association. However, as Renee points out “only 13% of CEO and president positions are occupied by minorities.Â And if you drill that down further to identify the percentage of women, of color or otherwise, in these positions, it’s alarmingly low.â€

[Related: 5 Women in The NBA Making History Off the Court]

But in fairness, in comparison to other men’s sports leagues, the NBA is leading the way in hiring minorities and women. According to the 2014 report by The Institute for Diversity and Ethics in Sport (TIDES), women held 40.9 percent of all professional positions in the NBA league office and people of color made up 35.1 of professional staff positions. Furthermore, there were 42 women serving as vice presidents in the 2013-2014 season.

Overall, TIDES gives the NBA an A+ for racial hiring practices and a B+ for gender hiring.

“Across the board, I believe minority women are underrepresented among the senior ranks in sports.Â  Hiring practices among women within sports have improved, but not to the point where the ceiling has disappeared,â€ notes Renee.