Women of Power 2017 Kicks Off With A Bang 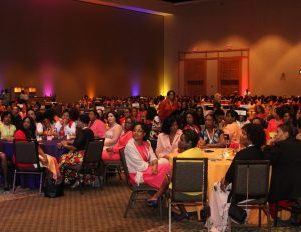 The 2017 Black Enterprise Women of Power Summit began with a bang on Thursday!

Each year, hundreds of women from around the country attend BE’s signature event, which was designed to empower and inspire professional women of color. This year, over 800 influential businesswomen and leaders convened at the Arizona Grand Resort and Spa in Phoenix, where they were greeted with beautiful, warm weather, high energy, and lots ofÂ anticipation. Old friends greeted each other with hugs and kisses, while strangers quickly became acquainted by chatting in the hotel lobby.

Throughout the afternoon, a shuttle bus took groups of women to a local Macy’s store for a social shopping experience like no other. The unique shopping excursion granted participants the opportunity to shop while being pampered with mocktails, massages, and makeovers. Macy’s also sponsored a complimentary southwestern lunch and fashion show.
Chelsea Jackson of Harlem, New York, says the DJ’s and social activities “added to the experience.” Likewise,Â CassandraÂ Webster of Memphis, Tennessee, said, “the experiences were very thought out,”–though it seems like she enjoyed the mocktails most. “It was a nice treat after the bus ride,” she told BE.

Later on, attendees had the chance to socialize at the Power Suite: Meet, Mix, and Match networking event, which was sponsored by ADP and emceedÂ byÂ Dee Marshall, an author, TV lifestyle expert, and the managingÂ director of Raise the Bar L.L.C.

The Legacy Awards Reception, sponsored by Toyota, also gave women the opportunity to connect right before the 12th Annual Legacy Awards Gala. This year, BE honoredÂ Phylicia Rashad, Pastor Shirley Caesar, and Ursula Burns with a Legacy Award.
“Women are power, we are created that way by design,” said Rashad, while accepting her award.

CaesarÂ delighted the crowd by singing the portion of her famous gospel hit “Hold My Mule” that was remixed into the viral sensation “You Name It Challenge” last year.

In addition, Marcia Ann GillespieÂ was honored with the Barbara Graves Legacy Award.

How to Fix These Big Things Businesses Keep Getting Wrong

How to Own a Business