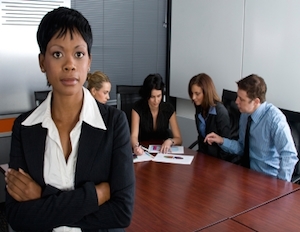 According to a new study, women of color who exhibit a dedication to diversity can be labeled a liability in the workplace and punished for it.

The University of Colorado published a report that found that non-whites and women executives who push for their own to be hired and promoted suffer greatly when their own performance reviews come up. For example, a black woman who shepherds other women up the ranks is perceived by her higher-ups as less competent.

The paper, which is set to be presented at an Academy of Management conference next month, aims to highlight the standards set by those representing the upper echelon in corporate America. “Women can lean in and try to bridge the confidence gap all they want, but they’re going to be penalized for advocating for other women, just like non-whites are,” David Hekman, author of the study and an as assistant professor of management at the University of Colorado’s Leeds School of Business, said.

Hekman’s research suggests the presence of women or minorities at the head of a company doesn’t have a large impact on the rest of the organization. If the heads of said corporations make it risky to advocate for their own respective groups, then it is accurate that successful women and minorities would be surrounded by white males only. Hekman and two colleagues pooled 362 executives, including CEOs, vice presidents and directors from the banking, consumer, products and food industries.

The belief stems that negative stereotyping of minorities and women is a result of perceived self-interest. “People are perceived as selfish when they advocate for someone who looks like them, unless they’re a white man,” he said. According to David Hekman, if a corporation wants to end the trend, they should have a white man head up diversity efforts. Or, better yet, realize that this is the 21st Century and minorities and women are capable leaders in corporate America.