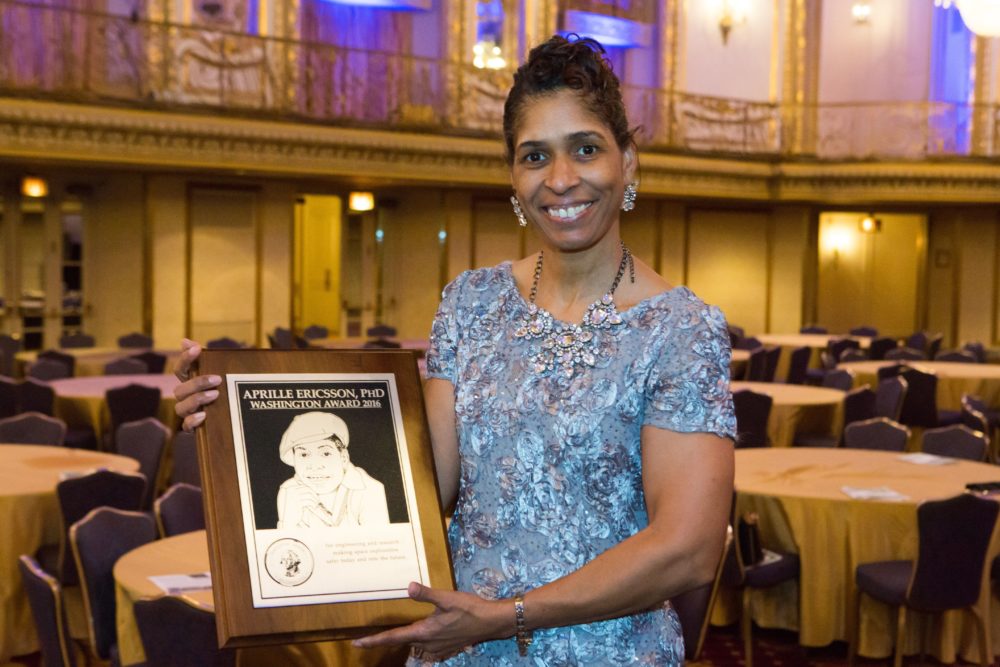 As the U.S. plods along the road to recovery, many predict that economic expansion will come from growth industries such as the STEM fields: science, technology, engineering, and mathematics. Yet, that avenue isn’t paved well for everyone. African American women earned only 0.34% of Ph.D.s in computer science and 0.58% in engineering, as of 2006, according to the Anita Borg Institute for Women and Technology. There are many reasons for this underrepresentation, including social and economic factors as well as gender bias. However, strides have been made and a select few have persevered: researching, innovating, mentoring, and paving the way for other African American women (and men) to follow in their footsteps. In an effort to shake up our imaginations and break through more roadblocks, we present five top black women in STEM careers who don’t just work in some of the world’s most innovative fields–they excel in them.

As the deputy instrument manager for the ATLAS Instrument team at NASA, Aprille J. Ericsson leads development of an instrument to house satellite-based lasers used to measure the topography of ice sheets from space in order to measure global climate changes.

Ericsson, who holds a master’s of engineering and Ph.D. in mechanical engineering in aerospace from Howard University and who earned a bachelor’s of science in aeronautical/astronautical engineering from Massachusetts Institute of Technology, was previously one of the lead engineers on the concept study report for GEMS, or the Gravity and Extreme Magnetism Small Explorer. The unmanned observatory, which is scheduled to launch no later than April 2014, will be the first to measure polarized X-rays to study supermassive black holes and magnetars. Ericsson’s work was influential in winning $105 million of funding for the project in 2009.

Ericsson was also the project engineer for LOLA, a lunar orbiter laser altimeter, which created an unprecedented topographic map of the moon’s landscape in late 2009.

“High school students need to be encouraged to do summer programs. If they have an interest in engineering or science they need to apply at field centers at NASA and NOAA so they get a feel for what they want to do,” says Ericsson, who did the same at a young age. “It’s really important to have [hands-on lab] exposure as early as freshman and sophomore year. They perform better with their course work because they learn in an applied atmosphere.” Studying soil and sedimentation of rivers, estuaries, and beaches, Ashanti Johnson’s work as an aquatic radiogeochemist was instrumental in decoding the environmental effects of potentially hazardous incidents throughout Puerto Rico.

Johnson can be found scouring the beaches of Rincon, where a nuclear power plant operated until the 1970s, or collecting soil samples in Vieques, where depleted uranium residue remained for years following an artillery firing range run by the U.S. Navy. “These problems have been investigated very little,” says Johnson. “It takes a lot of dedication and is really labor intensive. You get muddy, you get wet, and at the end of the day, you’re happy to have processed your samples.”

Johnson earned a bachelor’s degree in marine science and a Ph.D. in chemical oceanography from Texas A&M University. Her Ph.D. work helped assess whether nuclear waste released in the Arctic by the former Soviet Union migrated toward the Alaskan coastline. She also spent a short time working at Exxon as a geochemist before venturing back into teaching at Georgia Tech and Savannah State University.

Acclaimed for her mentorship, Johnson was awarded the Presidential Award for Excellence in Science Mathematics and Engineering Mentoring by President Barack Obama in recognition of her work bridging professional development activities for underrepresented minorities. As the executive director of the Institute of Broadening Participation, Johnson has helped 159 students achieve a Ph.D. in earth system sciences.

Tanya Moore demonstrates that mathematicians can help divert social catastrophes. As the leader of the city-wide 2020 Vision Projects, launched in June 2010, Moore’s job is to help close the achievement gap between white, black, and Latino students in Berkeley, California, by 2020. She has a central role in designing the surveys, methodologies, and statistical indicators to be used for tracking student progress. After analyzing the data, she will help design and evaluate youth interventions and services across community agencies and city departments.

Moore’s concern with increasing educational achievement for minorities doesn’t end in Berkeley, where she received her Ph.D. in biostatistics. She also spearheads Infinite Possibilities, a national conference for women of color in all stages of mathematics–from high school students to post-docs and women in private industry. “I started it initially as a reunion because of the experiences I had at Spelman [College]. Now it has grown. It has created this wonderful community over the last few years.”

Participants regularly write Moore about how Infinite Possibilities helped them feel less isolated in grad school. She understands their frustration firsthand. While working on a master’s degree at Johns Hopkins she received her share of intolerant comments. “People told me I would only pass qualifying exams because I was an African American woman and the school wanted to make their quota. I’d walk into a room and people would tell me I was in the wrong classroom. Sometimes a professor would say ‘Wow, you did better than we expected.”

ACG artist and computer animator Lisette Titre has contributed to some of EA’s highest profile games, including Tiger Woods Golf for Nintendo’s Wii, The Simpsons, and Dante’s Inferno.

As a character modeler, Titre takes data from scanned images of characters or real-life individuals and reworks the information to build a 3-D digital sculpture. After the character’s digital skeleton is built, she takes the skeletons and applies computer modeling controls so the fingers will curl, the legs will bend, and the character moves with fluidity.

Titre, who is often the only animator working in-house on her projects, also manages a team of outsourced artists in China, Australia, and Canada. Each team can consist of five to 20 people who work on game titles for as little as one year to as long as four years.

After graduating magna cum laude from Miami International University of Art and Design with a degree in computer animation, Titre finds herself virtually alone in her field–something she hopes to change as a member of Blacks in Gaming, a nonprofit dedicated to creating networking and collaboration opportunities for blacks in the gaming industry. “I’ve never worked with an African American woman in an artist’s capacity,” she says. “We need more diverse ideas. We keep seeing the same thing over and over again.Blacks in Gaming is starting a mentoring program and plans to reach out to middle schools in Oakland, California, and other underserved areas.

The Biomedical Engineer
Treena Livingston Arinzeh, Ph. D.
Associate Professor
New Jersey Institute of Technology
Armed with a master’s in biomedical engineering from Johns Hopkins University and a Ph.D. in bioengineering from the University of Pennsylvania, Treena Livingston Arinzeh was the first to demonstrate, in 2003, that scientists can implant donor stem cells derived from the bone marrow of adults to form functional, viable bone tissue that is not rejected by the body.

Replacing bone tissue using donor stem cells has far-reaching applications. For one, patients may not need to undergo immunosuppression therapy, which can cause infection, osteoporosis, and damage to the kidney, liver, or pancreas. In addition, her research has led to clinical methods to induce bone repair of diabetics and others who have bone injuries. As a result of her findings, in 2004 President George W. Bush presented her with the Presidential Early Career Award for Scientists and Engineers, the nation’s highest scientific honor. Her research is now mimicked in bone marrow transplant procedures across the country.

Arinzeh, now an associate professor of biomedical engineering at the New Jersey Institute of Technology, says that women make up 50% of undergraduates in biomedical engineering but that there aren’t enough African Americans pursuing careers in her area. She says students must be engaged by mentors, and parents need to get them involved in extracurricular activities. “I think they don’t see enough of us that look like them so they can identify with that career as something they can actually do,â€ says Arinzeh, who invites 40 to 50 underrepresented high school students to her lab each summer, through the Project Seeds program, sponsored by the American Chemical Society.Â

Use Technology for Empowerment not Entertainment