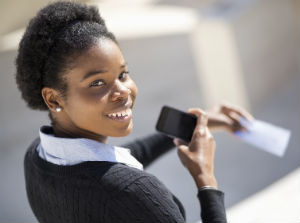 Four African American women business owners and professionals recently hosted an event to increase awareness about the widening wealth gap. It was partly in response to the recent and highly publicized deaths at the hands of police that have occurred in communities of color as well as the ongoing economic and social disparities that exist.

Over 100 business owners, stakeholders, and community leaders attended the #DivestToInvest black bank enrollment event, which took place at a local black-owned restaurant and a community staple in Washington, DC. The meeting called for members of the black community to band together in an effort to support black-owned banks and businesses. It also called for increased financial literacy, opportunities, and resources for communities of color.

[Related: The Top Black Banks To Bring Your Next Paycheck]

“African American communities throughout the United States have, for generations, lacked critical and necessary resources such as access to healthy food options, high-paying jobs, quality education, and affordable housing,â€ says Waikinya Clanton, spokesperson for the group. “We believe that building up our community will grant African American businesses and stakeholders the access to the financial resources they need to build, invest, and reinvest in our communities.â€ Clanton serves as the executive director of NOBEL Women (National Organization of Black Elected Legislative Women), an organization that has made an effort to help women become powerful leaders.

Assembled to provide resources of education and elevation to the black community, the conveners of the #DivestToInvest Movement have stated that they are committed to strengthening, supporting, empowering, and ensuring financial independence and sustainability within the black community. They seek to do this through organized, collaborative efforts in support of black-owned-and-operated banks, businesses, and institutions.

The organizers shared a letter with attendees that to assist people in divesting their dollars from big banks in order to invest in black-owned banks. Individuals were encouraged to join and follow the movement on Facebook, Twitter, and Instagram, using the hashtag #DivestToInvest.

According to National Bankers Association President Michael Grant, the movement to bank with black banks really began more than 100 years ago, but then became dormant after racial segregation ended.Â “Thousands have been mobilized to protest with their spending power. Many African American consumers are linking the shootings with a sense of powerlessness, feeling undervalued and disrespected.â€

The #DivestToInvest call to action is the latest move that has become a part of the #BankBlack movement, which is aimed at empowering the black community by taking control of its wealth and investing it into the community through one of the 23 black-owned banksÂ in the U.S.

Black Entrepreneurs Introduce the Last Travel Pillow You Will Ever Buy