Invisible Woman: The Struggles of Black Girls in School 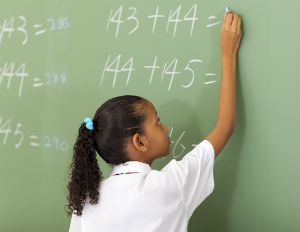 I recently sat with four colleagues during a school-based professional development session on diversity. There was a Jewish woman, a Mexican woman, a white man, and me. We had to answer the question, “Which part of your identity has had the biggest impact on you growing up? Race, class, or gender?â€

I learned a lot about my colleagues that day, including one who admitted being afraid to walk near a black man (I won’t say who said that). As for me, all three factors have deeply affected me.

Gender, however, is the one I’ve explored the least.

Growing up, my friend’s older brother would call me “the young and the breastless.â€ Boys would form a cross with their fingers and run away screaming like I was a witch. I was tall, flat, and dark.

At least that’s how my male counterparts made me feel. (Girls weren’t as cruel.)

So I poured my energy into being a top student. My fight-back strategy was to silence the bullies with my brilliance. Plus, I could imagine nothing worse than becoming an unsightly, broke, dumb black woman like the one-dimensional characters I saw on TV shows depicting a rich, glamorous white man’s world.

The angst of my young reality was reflected in a recent Teaching Tolerance piece called Don’t Forget About Black Girls. It reminded me how invisible I used to feel at school.

While black females have madeÂ significant gains in college enrollment rates, we are also the fastest growing population in the juvenile justice system.

Worse, no one seems to be paying attention. The reportÂ Black Girls Matter: Pushed Out, Overpoliced, and UnderprotectedÂ argues that discipline and behavior studies tend to be laser focused on black boys, and according to theÂ webinar accompanying the report, discourse regarding gender is largely centered on white girls in more well-off schools that don’t have zero-tolerance policies. Meanwhile, African American females are traveling at full speed along the school-to-prison pipeline, a trend virtually ignored by researchers.

For example, the report found that black girls are suspended six times as often as white girls and 10 times more in New York State.

I was one of the fortunate ones. Though I felt ugly on the outside, I never once doubted my inner beauty or acted out in school. When I wasn’t studying, doing chores, or jumping rope, I poured myself into church activities. I read the Bible and loved Proverbs 31, which praises a woman for her virtuous character, not her good looks.

ButÂ what about today’s black girls who look “on fleekâ€ but feel like broken glass? Where do they turn to when they have no faith and no safety at home or at school? What about the girls who mask their insecurities and pain with endless selfies plastered on social media? When their frustration with the past and fear of the future cause them to disengage or lash out at school, what happens?

Black girls don’t get the counseling they need. They get suspended. Then expelled. They go to juvie. Then, they drop out. And when they can’t find a job, they commit minor crimes. They get arrested. They go to court. They get sent to prison.

One African American male principal in Chicago told me that based on theÂ Adverse Childhood Experiences (ACE)Â survey, about 45% of his predominantly low-income black students have a parent who is either dead or incarcerated. A whopping 90% of his students reported experiencing childhood trauma. During the past few years, he has seen an uptick in violent incidents involving girls.

“I used to worry about my black boys, but now the girls are the ones fighting and causing the most trouble,â€ he said.

Historically, women have always been the quiet strength of the African American community, so hearing about large numbers of black girls falling apart in schools is a troubling phenomenon that must not go unaddressed.

By my senior year in high school, I had accepted my beautiful cocoa brown skin, thick braided locks, and brown eyes that slanted upward. I had curves, and the same boys who taunted me in elementary school were now asking for my phone number. Moreover, I was ranked at the top of the class and voted “Most Likely to Succeed.â€

This black girl was on the top of the world, fairy dust all around me. That is, until I enrolled in a private liberal arts college that had little ethnic diversity among students or staff. None of the white boys had any interest in me (except one red-headed, freckle-faced basketball player who asked me out and then stood me up). And when I tookÂ my first science class, I realized that I wasn’t as smart as I’d thought I was.

MyÂ #BlackGirlMagicÂ seemed to stop working. But coming home on the weekends and seeing the pride in my momma’s eyes always broke the spell of disillusionment. That’s what black girls need. They need us to see them, affirm them, love them. Love produces the most amazing magic show.

This post was written byÂ Marilyn Rhames, whoÂ currently serves as alumni support manager at a K-8 charter school in Chicago. Rhames writes award-winning education commentary featuredÂ on Chicago’s Moody Radio.Â She is a 2016Â Surge Institute FellowÂ and the founder of the Christian nonprofit,Â Teachers Who Pray.