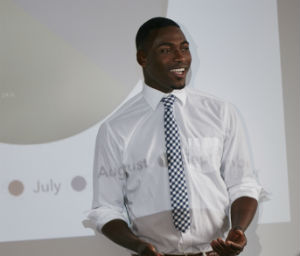 Ten years ago, if a Detroit entrepreneur wanted to find an investor to get his or her startup off the ground, that founder would go west. But investors and entrepreneurs–many in high-tech fields—are no longer just looking toÂ Silicon Valley or even Silicon Alley–they’re coming to Detroit, according to the organizers of the Accelerate Michigan Innovation ChallengeÂ (AMIC). Now in its seventh year, AMIC is touted as one of the largest businessÂ plan competitions in the country, awarding $1 million in cash and in-kind prizes.

Past recipients include entrepreneurs likeÂ Banza,Â a startup that makes gluten-free pasta made of chickpeas and won the AMIC’sÂ 2015 Grand Prize. Also, SkySpecs, which was built by a group of University of Michigan graduates and is aÂ groundbreaking software that makes aerial drones fly autonomously, won the 2014 Grand Prize.

Applications for AMIC 2016 are now open. The competition attracts more than 200 applications annually, note organizers. Some 36 companies across industries will move through to the semifinals to compete for the $500,000 cash grand prize. On November 3, 10 finalists will pitch their business plans to a panel of judges.

Since its inception, AMIC has successfully put Michigan companies onÂ theÂ radar ofÂ local and national VCs. The state of Michigan is outpacingÂ theÂ nation, in terms of angel and venture capital investment.Â In fact, while VC investments have decreased in recent years nationally, it has more than tripled in Michigan,Â according to the Michigan Venture Capital Association’s 2016 Annual Research Report.

Accelerate Michigan partnered with the Michigan Venture Capital Association, an organization designed to bring together the state’s venture capital participants, to attract prominent venture firms and angel investors to attend its pitch competition. These firms and investors are not only expected to attend AMIC’s program, but also to participate as judges and mentors for the competing companies.

What’s more, Accelerate Michigan generates exposure for companies competing through partnerships with accelerator programs. To date, AMIC companies as a whole have raised more than $550 million in follow-on funding and created more than 1,000 jobs in Michigan, according to a press announcement.

Supported by public and private sector funding, AMIC is advancing Michigan’s entrepreneurial ecosystem. Such efforts appear to be in keeping with the entrepreneurshipÂ that is reportedly fueling Detroit’s economic recovery.

In his op-ed written exclusively for BlackEnterprise.com, Jamie Dimon, Chairman and CEO of JPMorgan Chase & Co., stated Detroit is home to over 61,000 small businesses, including about 50,000 minority-owned small businesses. It is the fourth largest city for minority entrepreneurship.

He also stressed the Motor City is a place that welcomes and encourages business investment. “It’s a good time to be an entrepreneur in Detroit. Helping small businesses grow is one of the many ways JPMorgan Chase’s $100 million investment is supporting the city’s comeback.â€

Verizon Initiative to Shatter Stereotypes of Young Men of Color