University of Missouri Football Team: The Power of Student Athletes 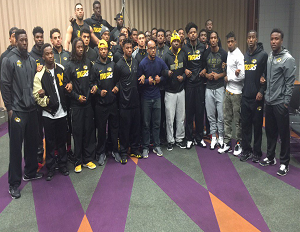 For the past few years, the racial tensions of America have been at the forefront of news headlines with countless incidents of police brutality and racism leading to a national outcry for justice and social equality.

While campus-wide protesting is nothing new, a group of more than 30 black student athletes at the University of Missouri’s flagship campus are proving just how much power and influence student athletes can have.

After months of racial unrest on campus, some of Mizzou’s most prized students decided to stand in solidarity with the rest of their peers and demand that the system’s president, Tim Wolfe, be removed from his position for his lack of response to racial incidents on campus. The players’ decision to boycott all football-related activities until the school changed its leadership came on the heels of Mizzou grad student Jonathan Butler announcing Nov. 2 that he was going on a hunger strike until Wolfe’s resignation.

On Saturday, student athlete Anthony Sherrils, who is a sophomore defensive back, tweeted, “The athletes of color on the University of Missouri football team truly believe “Injustice Anywhere is a threat to Justice Everywhere.” We will no longer participate in any football-related activities until president Tim Wolfe resigns or is removed due to his negligence toward marginalized students’ experiences. WE ARE UNITED!!!!!”

On Sunday, the team followed their words with action by canceling practice as head coach Gary Pinkel tweeted out a picture that showed the entire football team and staff standing behind Butler’s fight for equality.

The Mizzou Family stands as one. We are united. We are behind our players. #ConcernedStudent1950 GP pic.twitter.com/fMHbPPTTKl

Currently, Missouri’s student body is 77% white and 7% black. Out of the 84 football players attending the school on scholarship, 58 of them are African American.

Butler’s hunger strike decision was just a fraction of the campus-wide effort led by the group Concerned Student 1950, which is named after the first year the university admitted black students into its institution. With the support of its athletic peers, the efforts of Butler and the organization Concerned Student 1950 made national headline news, and added a price tag to the trending hashtags #MizzouHungerStrike and #ConcernedStudent1950.

It’s no secret that college sports is a big business and that a significant portion of university revenue is generated from the athletics department. According to USA Today, athletics at the University of Missouri contributed more than $83.7 million to the school’s revenue in 2014, with the football team bringing in more than $35.6 million.

Hearing the cry of the student athletes and several other student activists, Gov. Jay Nixon weighed in with his thoughts on the issue, while members from the university’s faculty planned to begin a two-day walkout in support of the student’s fight for justice.

[WATCH] Part 2: Luxury and Adventure on a Budget: Zanzibar