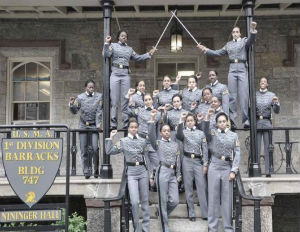 Last week a group of graduating black, female West Point cadets were thrust into the spotlight when a photo of them raising their fists went viral.

The women were posing for their “Old Corps” photograph, a West Point tradition undertaken by all graduates of the revered military academy. The 16 cadets depicted in the photo comprised the entirety of the black, female population of West Point’s 2016 graduating class, save for one.

Apparently the controversy regarding the women’s raised fists stemmed from well-known military blogger, John Burk. In a blog titled Racism Within West Point,Â Burk accused the women of using the raised fist gesture to associate themselves with the Black Lives Matter movement, which he characterized as “a group that has been known for inflicting violent protest throughout various parts of the United States, calling for the deaths of police officers, and even going so far as to call for the deaths of white Americans.”

While many took to social media to belittle, harass, and ridicule the women, others celebrated them for the rare feat they had accomplished in graduating from the nation’s most prestigious military academy.

In a press release obtained from West Point today, the military academy announced that the women in the photo “did not violate Department of Defense or Army regulations.”

The statement also shot down any arguments purporting the women were purposely advocating for the Black Lives Matter movement:

“Based upon available evidence none of the participants, through their actions, intended to show support for aÂ political movement.â€

Instead, West Point determined that the women raised their fist to “demonstrate unity and pride.“

However the Academy superintendent,Â  Lt. Gen. Robert L. Caslen, Jr., ended the statement with a strong reiteration of the expectations all militaryÂ personnelÂ must abideÂ by. “We all must understand that a symbol or gesture that one group of people may find harmless may offend others. As Army officers, we are not afforded the luxury of a lack of awareness of how we are perceived.â€

How Much Rent is Too Much Rent?

Google Steps Up for Flint