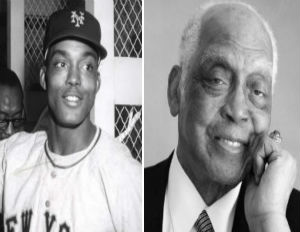 On Monday, Jan. 11, legendary Hall of Fame outfielder Monte Irvin died at age 96, according to reports.Â  He served as a prolific figure in integrating Major League Baseball and would have been in Jackie Robinson’s shoes well before he became the first African American in the league.

[Related: Ken Griffey Jr. to Be Inducted Into Baseball Hall of Fame]

He played for the Negro Leagues and later served as baseball’s first black executive. He was inducted into the Hall of Fame in 1973 after the Hall was made open to Negro League players.

He had reportedly been living in a Houston, Texas, retirement home and was the second-oldest living Hall of Famer before his death.

He played four times in the Negro Leagues’ East-West All-Star Game in 1941, 1946, 1947 and 1948, and he spent seven seasons with the Giants and one with the Cubs, finishing his major league career with 99 home runs.

One of 11 children, Irvin was born in Haleburg, Ala., in 1919, but grew up in Orange, N.J., where he had exceptional skill in four sports, baseball, football, basketball and track in high school, earning 16 letters and setting a state record for the javelin.

He would go on to choose baseball as his main profession, and in 1947 broke baseball’s color barrier with the Brooklyn Dodgers. In 1949, he became Major League Baseball’s fifth black player when he pinch-hit for the Giants in a game against Jackie Robinson and the Dodgers.

Willie Mays, the Giants’ great center fielder said in a statement, “I lost someone I cared about and admired very, very much; someone who was like a second father to me.â€

Read more about Irvins’ legacy via The Shadow League.