WATCH: Kendrick Lamar Perform 'i' At Toronto's We Day Festival 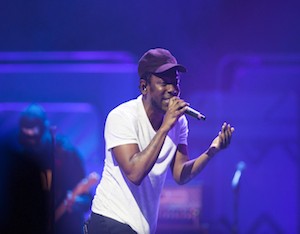 In front of 20,000 youth and educators supporting the wave, Kendrick Lamar took a break from rapping alongside Prince to perform at Toronto’s We Day Festival.

Top Dawg Entertainment’s lyrical Black Hippy touched down in Canada’s most populous city to surprise the young with a first time performance of his new single “i” (Love Myself) at the Air Canada Centre.

In addition to the Compton City rap phenom, Big Sean, Nelly Furtado, Joe Jonas, and Selena Gomez also took part in the star-studded event. “This is a celebration right now. We Day, y’all did it,” Kendrick said to the masses all singing along with his infectious single.

For those who are unfamiliar, We Day is a movement organized by Craig and Marc Kielburger (Free the Children founders), where youth and educators come together to make the world a better place. By implementing world-renowned speakers and performers with tens of thousands of youth, We Day aims to jumpstart a year of action through the We Act program. It has since expanded to include events across Canada, as well as the United States and the United Kingdom.

We Act offers educational resources and campaigns to help young people turn do a local and global action. By empowering these kids to find their passion, they in turn create the change they want to see and become active world citizens.

You can watch K. Dot’s surprise performance for the “largest and loudest classroom in the world” in the clip below:

You Can Be Netflix’s Professional Instagrammer