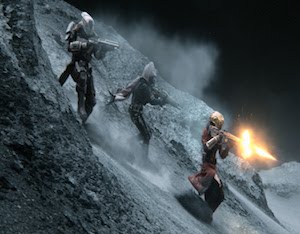 The good folks at Bungie are ramping up their promo game as Destiny, their much-anticipated game, is slated to hit shelves next week. To satiate fans, the company has let loose a new trailer but with a twist: turning the animated game into a live-action TV spot.

Triple-A titles like Halo and Call of Duty have taken similar measures to great effect in the past, but Destiny‘s new clip looks to have the grandest impact. Buoyed by a massive $500M series budget, it is crystal clear that they aren’t going to do anything moderate or minute in favor of getting an attention-grabbing spot on primetime TV.

For those still unaware about Destiny, the sci-fi, first person RPG shooter finds players stepping in the role of a customizable Guardian who is tasked with the daunting mission to protect the last planet in the galaxy from a growing evil force. The trailer is a bit cheeky and cliche, as three Guardians dressed in real-life versions of power armor head to the moon, Venus and Mars to kill hordes of aliens and rattle off one-liners.

Set to the “classical” sounds of Led Zeppelin’s “Immigrant Song,” video games’ most trafficked title still remains something of a mystery in not showing off any new areas or enemies. Originally, the game was trotted out for a relatively large alpha back in May 2014, and with the retail release date looming in the distance – Bungie has all the confidence that’s rare in the gaming industry.

Take a few minutes to watch this live-action TV spot and keep in mind Destiny will be available for the PlayStation 4 and Xbox One on September 9th.

‘BusinessFAB’? If So, This Women’s Entrepreneurship and Leadership Conference Is For You