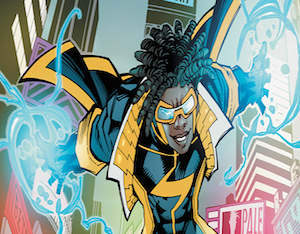 Warner Bros. is attempting to be the loud kid in the room, especially after Marvel’s official release of their Avengers 2 trailer, by announcing a slew of big announcements.

From officially debuting their plans for a shared DC Comics Cinematic Universe to their upcoming The LEGO Movie spinoff, LEGO Batman, the company is now prepared to unveil its new digital division called Blue Ribbon Content.

According to The Hollywood Reporter, Warner Bros. has announced Blue Ribbon Content as the official name of its short-form digital division, which will include a live-action take on Static Shock. The character, Static, was originally created in 1993 by Dwayne McDuffie, Robert L. Washington III, and John Paul Leon for Milestone Comics.

The imprint was created as a way to increase representation of African-American creators and characters in mainstream comic books. Static, whose real name is Virgil Hawkins, possesses a cache of electricity-based powers that help rescue citizens in Dakota City. Fans of the character may best know of him from the animated series that aired originally on Kids WB and found actor Phil LaMarr voicing the titular character.

Following the events of Flashpoint in 2011, Static left the Teen Titans (from Final Crisis in 2009) and received a solo series as part of the first wave of ‘New 52’ titles, but was cancelled after just eight issues. Blue Ribbon has enlisted writer-producer-director Reginald Hudlin (Django Unchained) to help develop the live-action series.

Blue Ribbon is also working on a virtual reality experience based on Batman: The Animated Series, a new Mortal Kombat series, and possibly the Justice League: Gods and Monsters Chronicles that will debut on Machinima (though the latter was not confirmed).