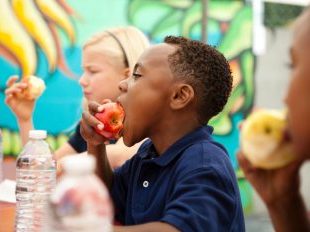 During my homeschooling years I met lots of interesting people: families whose children played the cello in professional orchestras, sang opera, or danced ballet; others whose youngsters had taken the SAT and scored nearly perfect scores–as sixth graders.

Another thing I noticed–as a group, the homeschoolers I knew were careful eaters. Many didn’t eat meat; some didn’t eat wheat.

Could there have been a connection between their notable achievements and their healthy diets? Perhaps.

According to The Atlantic, a new study has reported a link between the quality of food in students’ diets and their scholastic achievement.

Somehow this doesn’t surprise me. You’d have to be blind not to notice the proliferation of fast food restaurant options in certain neighborhoods and their dearth in others. I’m sure that’s not unintentional.

Here’s an excerpt from The Atlantic about the results of the study.

For more than a decade, standardized test scores have been the dominant metric for measuring what public school students know and are able to do. No Child Left Behind, the sweeping federal education law enacted in 2002, ushered in a new era of student testing and school compliance. And in the years that followed–to meet targets and avoid sanctions–education leaders at the local and state levels have sought a variety of ways to boost students’ performance on tests, including extending the school day and giving bonus pay to teachers based on students’ test scores. Even less conventional methods, such as banning cell phones and offering yoga-like exercises, emerged as school administrators pursued the holy grail of high standardized test scores.

But according to a new study, there’s one option that may have been overlooked: the ubiquitous school lunch. As detailed in a recent paper, economists set out to determine whether healthier school lunches affect student achievement as measured by test scores. The intense policy interest in improving the nutritional content of public school meals–in addition to vendors’ efforts to market their school meals as good for the body and the mind–sparked the researchers’ curiosity and led to an unexpected discovery: Students at schools that contract with a [lunch vendor that provides healthier lunch options] perform somewhat better on state tests–and this option appears highly cost-effective compared with policy interventions that typically are more expensive, like class size reduction.

Read more in the Atlantic.

Foreclosure Turned This Woman From Stressed Buyer to Savvy Investor