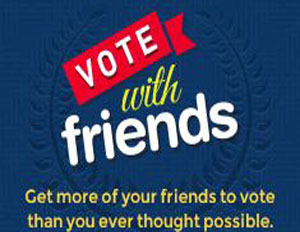 (Image: Fight for the Future)

Whoever said nothing good comes from the web will eat their words with this new Facebook app. Launched by Internet advocacy organization Fight for the Future, Vote with Friends makes sure you get to the polls on November 6.

The app allows users to check if their Facebook friends are registered to vote, whether they have pledged to do so and if their friends have voted early or on Election Day.

A study published by international weekly science journal Nature took a look at Facebook users on Election Day 2010 and found that online social networks have a direct impact on voter turnout. The New York Times reported that a “get out the voteâ€ message, showing each user pictures of friends who said they had already voted, generated 340,000 additional votes nationwide.

Co-founder and co-director of Fight for the Future Tiffiniy Cheng says social media trumps traditional reminder methods when it comes to encouraging friends and acquaintances to vote. “In an election where both presidential candidates have not completely inspired their base, Vote with Friends takes what works in real life to get out the vote – peer pressure from friends – and creates that social dynamic in the online world,â€ said Cheng to AllFacebook.com. Aligning with Fight for the Future’s core purpose, the app meets constituents where they’re at, mobilizing them to get to the polls.

The Vote for Friends app, which is primarily funded by the Ford Foundation, uses the Votizen API, according to Mashable. It’s based on public voter file data.

Facebook users, will you remind your friends to vote with this new app? Let us know what you think in the comments section.