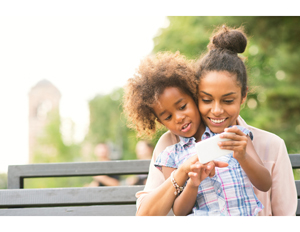 Storyline Online features well-known people—such as James Earl Jones, Kevin Costner, and Rita Moreno—reading children’s books with “inventively animated, original illustrations. The site is available 24 hours a day at no cost to children, parents, and educators worldwide, and receives more than 13 million views every month,” according to a statement announcing Ms. Davis’s contribution.

What good timing! Earlier this month, New York University researchers concluded that young children can learn as much from hearing a story through a digital device as they can from being read to by another person, according to the Hechinger Report. What matters most is the quality of the story, not the medium.

“This should calm family fears that digital media is not necessarily a good thing,” said Susan B. Neuman, professor of childhood and literacy education at New York University’s department of teaching and learning, in an interview with the Hechinger Report. “It can be a good learning tool, if used properly.”

The Hechinger Report writes, “The small study of 38 children in a Head Start preschool program sought to find out whether oral language comprehension differed if a story was delivered by a digital device or by an adult reading a words-on-paper storybook to the child. The children watched and heard the digital story on an app called Speakaboos that uses audio and pictures with action. The researchers adapted four of the digital storybooks to paper format for the study.”

When my kids were little, I discovered the phenomenon of children’s books on video at our local library. I loved them. We watched a story about a bear who gives the moon a hat. We watched Dr. De Soto, the mouse dentist with the not-quite-trustworthy fox patient. I don’t know if my kids enjoyed these videos as much as I did.

Storyline Online is similar—you see an adult reading the book and its pages and artwork, and hear appropriate sound effects, including music. This is quality screen time.

The Hechinger Report asserts that increasingly research is concluding that kids don’t need to be kept away from screens. It even cites the loosened guidelines of the American Academy of Pediatrics, which had initially prescribed screens up to age two; now the AAP says limited, quality screen time for children under two is ‘OK.’

I’m not sure if that’s a recommendation or a capitulation, but remember that there’s more to life than screens. It’s also OK to include actual books, crafts, nature, music, puzzles, and games in your kids’ lives as well.

3 Tech Scholarships to Apply for Now