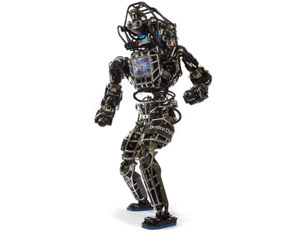 Meet Atlas, one of the most advanced robots currently in existence. Created by the company, Boston Dynamics, (which was acquired by Google in 2013), Atlas stands 5’9″ and weighs 180 pounds. Bipedal, it walks upright, just like a human, hence it’s dubbed, “The Agile Anthropomorphic Robot.â€

Atlas can “seeâ€ using two types of vision technologies: A laser rangefinder and stereo cameras. Its hands are capable of fine motor skills for picking up even small objects.

The robot can also walk on rough terrain and climb using its arms and legs.

Atlas is so human-like, it led one artificial intelligence expert to coin a new phrase for these types of humanoid robots, “Robo sapiens.â€ It was funded by DARPA (Defense Advanced Research Projects Agency). However, the Department of Defense claims that Atlas is not for warfare.

Instead, it is said to be used for emergency and rescue mission in environments that would endanger human life.

“It’s about trying to advance the technology for disaster response,â€ said Gill Pratt, the program manager for the Robotics Challenge at the DARPA.

The inevitable increase of machines to not only replace human labor but as possible weapons on the battlefield has been a hotly contested topic; especially so, since the advent of drones being used for combat.

Dr. Ayanna Howard, a roboticist and the Motorola Foundation Professor in the School of Electrical and Computer Engineering, Georgia Institute of Technology says that people don’t necessarily realize how commonplace AI has become.

“If you use Siri and you are always asking for Thai restaurants in Atlanta, [Siri] learns that this person is not interested in Chinese or soul food,â€ says Howard.

As computer processing becomes more powerful and cheaper, AI is developing so fast it even startles some scientists.

Hundreds of tech and science leaders including Steven Hawking and Bill Gates sent a letter to the International Joint Conference warning that AI could be more dangerous than nuclear weapons.

There is also an entire branch of philosophy dedicated to the ethics and possible dangers of artificial intelligence. The Association for the Advancement of Artificial Intelligence, founded in 1979, is a society dedicated to promoting the understanding of AI and also to exploring the ethics around it, particularly how it pertains to military use.