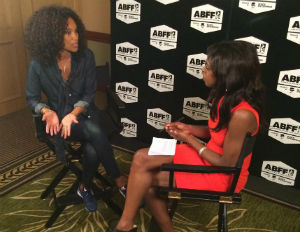 When you think of Mara Brock Akil, some of the first things that come to mind are some of the megahits she’s had as a writer and producer on shows likeÂ The Jamie Foxx Show, Moesha, and Cougar Town. Then there are the shows she’s created like Girlfriends, and the BET hit Being Mary Jane, which premiered in 2013.

When you talk to Akil, however, you are struck by her humility and the fact that this is someone who has walked through life with her feet firmly planted on the ground. It becomes obvious when you hear her discuss the ways in which her mother and grandmother’s early lessons have molded her, where the deep sense of being well-grounded she radiates comes from.

In addition to teaching Akil ‘right from wrong,’ her mother and grandmother also stressed that if she did not create a stable financial life, and live beneath her means, nothing else was really going to be possible.

Akil took their lesson to heart and is not only on her way to iconic status in the entertainment industry, but she and husband, award-winning director, Salim Akil, have also gone on to create entrepreneurial success as co-founders of Akil Productions, which started as Happy Camper productions in 2000.

Akil sat down with BE Senior Editor Stacey Tisdale and shared how she sustained herself financially before hitting the big leagues and why those early choices about money paved the way for her success.

How to Score a Meeting With Top Investors