How a Victim of Domestic Violence Rebuilt Her Career

Domestic violence is a hidden yet harsh reality for many women who show up at work every day. In fact, according to the National Coalition Against Domestic Violence, one in three women have been victims of [some form of] physical violence by an intimate partner.

To honor Domestic Violence Awareness Month, we asked survivor and entrepreneur Maleeka Hollaway for tips on rebuilding your career after leaving your abuser.

“We got married in 2010 and were divorced by 2014. During that time, I was a manager at a fast-food place, we had a huge fight and I had to purchase makeup to cover up scratches and small bruises. My employees could see right through my makeup. On another occasion, my earlobe was split during yet another argument and I had to go to the emergency room, which caused me to call in late again to work,” says Hollaway, CEO of OMG, a creative firm specializing in coaching, branding, and communications.

Don’t be so quick to start over.

Allow yourself time to process what you’ve been through so that you can properly heal. Starting over requires a renewed, refreshed, and reset spirit. Getting to that place takes time.

Use your story to your advantage.

Telling your story can open new doors for you personally and professionally. I shared my story in my co-authored book, 20 Beautiful Woman-Volume 2. People told me how it helped them and would also ask me for advice. This led me to obtain certifications in life coaching and business success coaching and launch OMG. People think that an abused person is weak-minded. That’s not always the case. I would have never launched my business had I let my story stay inside of me.

Create who you want to be.

Don’t allow others to put a label on you. Your story is not who you are, it’s what you lived through. If you want others to respect you as a good decision maker, make better decisions. You create the person you want to be known as in spite of your past.

When re-building your career, consider the first part of the word, “re.” This means that you’ve built your career once, so you can do it again. The goodness in this rebuild is that you know so much more than you did before. If you’re in management, you probably learned that life situations happen and should be considered before making reprimands on that employee who always seems to “have a hard time.” Be the person you know you needed back then.

This Coca-Cola Executive May Be Liberia’s Next President 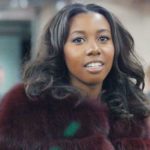 How a Formerly Homeless L.A. Publicist Uses Her Network to Increase Her Net Worth